Rahul Gandhi in Maha; to appear in court today 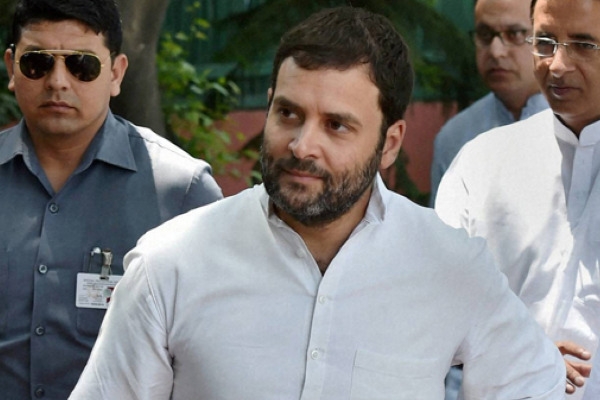 Mumbai : Congress president Rahul Gandhi will appear before a court in the adjoining Thane district today in connection with a defamation case filed against him by a Rashtriya Swayamsevak Sangh (RSS) worker.

Gandhi arrived in Mumbai this morning on a two-day visit to Maharashtra. He will appear before the court at Bhiwandi in Thane at 11 am today, a Congress leader earlier said. The court had on May 2 asked Gandhi to appear before it today to record his plea in the defamation case filed by RSS worker Rajesh Kunte in 2014.

Kunte had filed the case after watching Rahul Gandhi's speech at an election rally in which he had claimed that the RSS was behind the killing of Mahatma Gandhi. "The RSS people had killed (Mahatma) Gandhi," the Congress president had allegedly said in the rally. During his two-day visit to Maharashtra, Rahul Gandhi is also expected to address party workers and interact with its corporators in the Brihanmumbai Municipal Corporation.

Tomorrow, he is scheduled to meet the kin of Dadaji Khobragade, the rural inventor who revolutionised rice farming, at Chandrapur in Vidarbha, before returning to Delhi. Khobragade, 78, died earlier this month after a prolonged illness. Contrary to media reports, Rahul Gandhi's itinerary doesn't mention any meeting with NCP supremo Sharad Pawar, the leader said.

"Top leaders (of both the parties) can meet any time. But no such meeting is on the agenda today," he said. "Rahulji will appear before the court in the morning, address party workers in the afternoon and interact with Congress corporators about Mumbai's civic issues," the leader added.