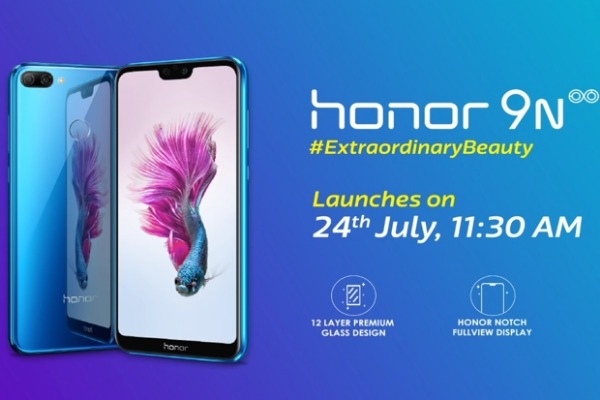 Huawei owned Honor has been on a roll lately and it seems that every other month, they keep things interesting by launching a new handset. The tech giant has just announced a new handset to its arsenal — the Honor N9 and the USP of this handset is that it is one of the most affordable handsets to come with the coveted notch design.

The notch is usually found on handsets that cost quite a bit more, but Honor has managed to make this design possible yet keeping the price of the handset to a minimum. The Honor 9N is not just about the notch though, as it comes in a stylish casing and available in four different colours — black, blue, lavender and turquoise. The first two shaded will be available at launch while the latter two will be made available after a month.Honor has added a 5.84-inch FHD+ IPS LCD display which they term as FullView with a Notch. The display has a 19:9 aspect ratio and has a 79 per cent screen-to-body ratio. The Honor 9N is powered by Huawei’s HiSilicon Kirin 659 SoC. There are three memory configurations, 3GB RAM with 32GB onboard storage, 4GB RAM with 64GB internal storage and the top of the line — 4GB RAM with 128GB storage. This can be expanded upon by using a microSD card up to 256GB.

The brand has added a dual-camera system on the rear with the primary sensor rated at 13MP while the secondary sensor is rated at 2MP. They support phase detection autofocus (PDAF), HDR, burst-mode and time-lapse. There is a single 16MP shooter in the front for taking selfies and it comes with a 4 in 1 Light Fusion Technology which converts 4 small pixels into 1 large 2.0um pixel, this helps in delivering brighter photos in low light scenarios. Other features include Portrait mode and Gender Beauty mode.Being a Huawei handset, the Honor N9 comes with Android 8.0 Oreo and EMUI 8.0 out of the box. Honor claims that by adding their custom skin on top of the Android OS, background applications and battery management is smarter and more efficient. Honor has added a 3000mAh battery to keep the handset charged up.