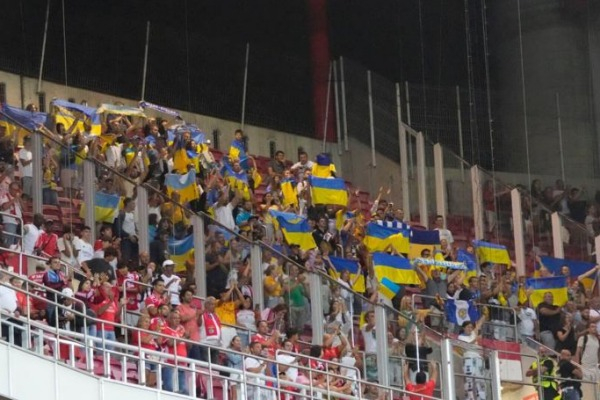 Dynamo Kyiv's improbable bid to reach the group stage of the Champions League ended at the final hurdle after the Ukrainian team's heavy aggregate loss to Benfica in the qualifying playoffs.

Benfica won 3-0 in the second leg in Lisbon thanks to goals by Nicolas Otamendi, Rafa Silva and David Neres, following up its 2-0 win in the first game last week in L dz, Poland.
Dynamo, a storied name in European soccer, hasn't played a domestic game all year because of Russia's invasion of Ukraine. Champions League qualifiers are the only matches Dynamo has played and it beat Fenerbahce and Sturm Graz to get to the final round.
The Ukrainian soccer league started its new season earlier Tuesday with Shakhtar Donetsk and Metalist 1925 drawing 0-0 inside Kyiv's Olympic Stadium, which has a capacity of 65,500 but was without spectators amid the war. Dynamo's first league game is on Sunday.
Ukraine will have representation in Thursday's group-stage draw in Istanbul through Shakhtar, which earned its place by being top of the Ukrainian league when it was abandoned last season because of the war.
While Dynamo heads into the Europa League group stage, Benfica the European champion in 1961 and '62 will be part of Thursday's draw along with Maccabi Haifa and Viktoria Plzen, who also qualified Tuesday.
Maccabi was gifted an own-goal in the 90th minute Milan Pavkov sliced into his own net at a free kick to claim a 2-2 draw with Red Star Belgrade and a 5-4 win on aggregate, securing a return to the Champions League for the first time since 2009-10.
In that campaign, Maccabi lost all six games and didn't score a goal.
Maccabi came from 2-0 down after 43 minutes in the second leg against the 1991 European champions, with Daniel Sundgren's goal in first-half stoppage time starting the fightback.
Czech team Plzen, which was last in the group stage in 2019, also came from behind to beat Qarabag 2-1 and win by the same score on aggregate.