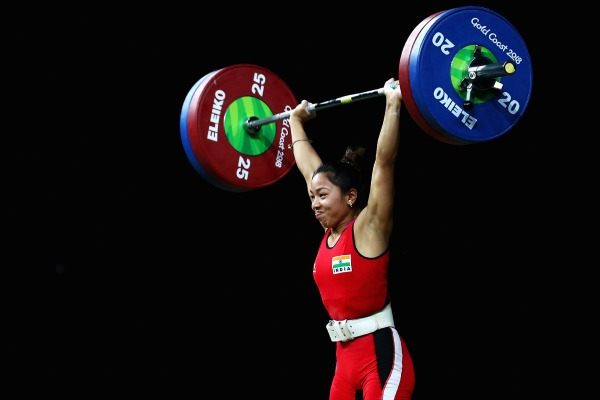 A new rule prevented India from rejigging the weight categories of its lifters for maximum advantage but country's 15-strong contingent, headlined by Mirabai Chanu, is still expected to return with a bagful of medals from the Birmingham Commonwealth Games.

The Commonwealth tournaments, be it the CWG or the Commonwealth Championships, have been a happy hunting ground for Indian weightlifters, who revel in the absence of traditional powerhouses like China and North Korea.
India have finished as the best-performing nation in the sport in the 1990, 2002, and 2018 editions. They are the second most successful nation in the sport with 125 medals, including 43 golds, behind Australia (159), whose dominance has taken a hit in the last few editions.
Indian weightlifters reigned supreme in the 2018 Gold Coast Games, bringing home a rich haul of nine medals including five golds. And this year too, all 15 lifters are capable of podium finishes.
However, only a handful of them are expected to strike gold.
To increase India's chances of winning more gold medals in the women's events, the Indian Weightlifting Federation (IWLF) and head coach Vijay Sharma planned to field Tokyo Olympic silver medallist Chanu, a sure-shot title contender, in the 55kg weight division.
Jhilli Dalabehera and S Bindyarani Devi were to compete in the 49kg and 59kg respectively while Poppy Hazarika would have presented her challenge in the 64kg division.
But the entries were rejected based on a new rule that stated only the top-ranked lifter in a category will qualify for the CWG and if he/she withdraws, the next best lifter will not get the berth, as was the case before.
This forced Chanu (49kg), Bindyarani (55kg), and Poppy (59kg) to drop back a weight class each which resulted in Jhilli missing out on the quadrennial event and no Indian representation in 64kg.
At the Games, all eyes will, no doubt, be on Chanu but while all others will strive to stand atop the podium, the former world champion, whose personal best in the women's 49kg stands at 207kg (88kg+119kg), a whopping 39kgs more than the second best lifter in the field, winning the yellow metal is almost a certainty.
All she has to do is execute two legal lifts, one each in the snatch and clean and jerk, to win her third CWG medal. She doesn't even need to bring her A game as her nearest rival, Nigeria's Stella Kingsley's best effort to date is just 168kg (72kg+96kg).
However, the 27-year-old, who already has a CWG gold and silver in her trophy cabinet, has set herself bigger targets. Chanu is expected to rewrite her clean and jerk world record of 119kg and is also eager to breach the much-anticipated 90kg mark in the snatch section.
"CWG is relatively easy for me, I will be fighting with myself. We have planned to lift 91kg or 92kg at the CWG. Hopefully, it will happen," she had told PTI in an interview last month.
Other Indian weightlifters are expected to face tough competition from their Nigerian and Malaysian counterparts in the women's and men's events respectively.
Youth Olympics gold medallist Jeremy Lalrinnunga's (67kg) chances of winning a gold have brightened considerably as Pakistan's Talha Talib, the favourite to win the 67kg title, is undergoing suspension after testing positive for banned substances.
Jeremy, who has excelled at the junior and youth level, is coming off a lower back injury that marred his world championship campaign last December and the prodigiously talented 19-year-old will be eager to leave a mark on the senior stage and earn a medal on his debut.
Two other title contenders are debutants Achinta Sheuli (73kg) and Ajay Singh (81kg). Both won the gold at the Commonwealth Championships in December.
Junior world championship silver medallist, Achinta, who has a personal best of 316kg (143kg + 173kg) will have to overcome Malaysia's Erry Hidayat, who has the same best effort as the Indian.
Ajay, on the other hand, will fancy his chances against his nearest rival Kyle John Ryan Christopher Park Bruce of Australia, whose personal best is six kg less than the Indian's.
Apart from Chanu, the contingent also has previous CWG medallists in P Guruaja (61kg), the seasoned Vikas Thakur (96kg), who will be vying for a third medal having won silver and bronze in the 2014 and 2018 games respectively, and Punam Yadav (76kg).
It will be a tall task for 2018 bronze medallist Gururaja to win the gold as he will have to contend with Gold Coast CWG 62kg champion Muhammad Aznil bin Bidin of Malaysia, who lifted eight kgs more than the Indian at the Commonwealth Championships.
Thakur's best shot appears to be bronze as Canadian Boady Santavy and Cypriot lifter Antonis Martasidis have a recorded better total efforts than him.
It will be the first time India will field lifters in the plus weight categories in the form of Purnima Pandey (+87kg) and Gurdeep Singh (+109kg).
The CWG is arguably the easiest platform for the Indian lifters to win medals and it is not a question of if but how many the Indian contingent brings back this time.
"Our aim is to win more medals than last time. Hopefully, we can bring back 4-5 golds," Sharma said.
Team: