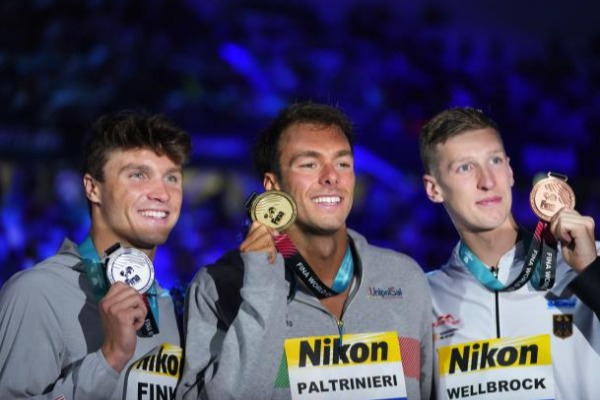 The American women clinched the Unites States' record 45th medal of the week by winning their 4x100 medley final on Saturday. Regan Smith, Lilly King, Torri Huske and Claire Curzan were 0.47 seconds ahead of Australia and 1.23 ahead of Canada.
"Yeah, I'm pretty tired," Huske said after her sixth medal in a busy week.
Canadian swimmers finished with 11 medals for their most successful worlds.
Veteran Gregorio Paltrinieri also won a thrilling men's 1,500 freestyle, as Italy ended the swimming worlds with five golds.
Paltrinieri was well under world record pace as he built a huge lead over his rivals before eventually finishing in a championship record 14 minutes, 32.80 seconds.
"I knew that they were coming, but I had quite a big lead. So that was enough for me," Paltrinieri said.
"That was my strategy, actually, to go out fast and try to open a gap with the others. So I'm really glad I did it."
Only Sun Yang's world record of 14:31.02 from the 2012 Olympics has been faster. The Chinese swimmer is suspended for a doping violation.
Bobby Finke, who has made an art of finishing strongly to overtake rivals, was unable to catch Paltrinieri as he finished 3.90 behind in an American record 14:36.70.
"In the beginning, I was just trying to keep up with him, but he just kept getting farther and farther ahead," Finke said.
"Hats off to Greg. I wasn't able to run him down. He had a great race, and I'm really proud of him."
Finke's silver was America's record-breaking 39th medal this week, eclipsing its tally from Budapest in 2017.
McIntosh wrapped up a highly successful week for Canadian swimming with her second world title after the 200 butterfly, clocking 4:32.04 in the women's 400 individual medley. It was yet another world junior record for the teen, who is doing little to keep down expectations.
McIntosh said she's not focusing on placement but was more concerned about how she executes each race.
"I've accomplished that and met my expectations when it comes to splits and targets, I mean swimming them and pushing my body as hard as possible. So I'm overall really happy," McIntosh said.
Katie Grimes, who is just seven months older than McIntosh, pushed her rival all the way before finishing 0.63 seconds behind for silver.
"I was just having a good time racing Summer. I have a feeling that this is a long future," Grimes said.
"I'm happy to get it started."
Another American, Emma Weyant, was third, 3.96 behind.
After some confusion, the United States' Justin Ress was confirmed as the men's 50 backstroke champion.
Ress' elation at winning the race in 24.12 ended promptly when he was disqualified for being submerged at the finish. Teammate Hunter Armstrong, who finished two-hundredths of a second behind, was awarded the win, while the 17-year-old Ksawery Masiuk of Poland was bumped up to silver and Italy star Thomas Ceccon grabbed the bronze.
FINA later overturned the disqualification, meaning Ress was awarded gold, Armstrong silver and Masiuk bronze.
"That's probably the worst possible way a race could go," Ress said.
Sweden's Sarah Sj str m won the women's 50 freestyle for her 10th gold at a worlds, all in individual events. It was the second time she completed the 50 free/butterfly double at a single worlds after Budapest in 2017.
Italy didn't have it all its own way when Lithuanian swimmer Ruta Meilutyte upset world record holder Benedetta Pilato by one tenth of a second to win the women's 50 breaststroke in 29.70.
"It's nice to be a world champion, I'm super proud of myself," said Meilutyte, who claimed her second world title nine years after winning the 100 breaststroke in 2013.
"I'm grateful for every step taken in my life, the bad ones and the good ones as well."
Italian journalists, team officials and support staff applauded when Paltrinieri came through the mixed zone following his tilt at the world record. Ceccon also interrupted Paltrinieri's interviews to give his teammate a hug.
The Italians were celebrating again later when Ceccon, Nicolo Martinenghi, Federico Burdisso and Alessandro Miressi set a European record of 3:27.51 to win the men's 4x100 medley by 0.28 seconds ahead of the Americans.