Titleholder France held by Croatia to 1-1 in Nations League 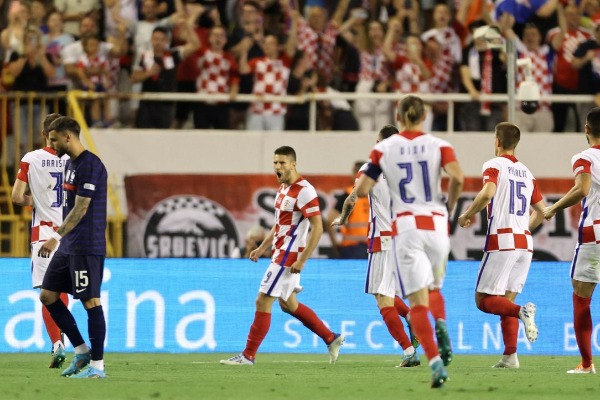 Titleholder France failed to rebound from its opening defeat in the Nations League after it was held by Croatia to 1-1. Midfielder Adrien Rabiot broke the deadlock after the break and substitute Andrej Kramaric equalized from the spot late for Croatia not to lose to France for the first time in 11 years.

The draw did neither any favors: France was stunned by Denmark 2-1 in Paris on Friday, the first loss after 20 unbeaten matches, and Croatia started its campaign by losing at home to Austria 3-0.
France will next travel to Austria on Friday while Croatia will visit Denmark, which took sole lead of their League A group.
Denmark made it two from two after beating Austria 2-1 in Vienna. Defender Jens Stryger scored six minutes from the end for Denmark. Xaver Schlager equalized for the hosts after Pierre-Emile H jbjerg's opener.
The match was delayed by 90 minutes due to a power failure.
Denmark tops the group with six points, followed by Austria with three. France and Croatia have a point each.
The four group winners in League A will qualify for the final four in June next year. The group winners in the lower leagues will gain promotion.
France coach Didier Deschamps called the draw satisfying after changing 10 of the side which started the loss against Denmark.
France missed star striker Kylian Mbapp , who picked up a knee injury against Denmark, and also absent were Karim Benzema and Antoine Griezmann, replaced by Wissam Ben Yedder and Christopher Nkunku up front.
This is our chance to prepare for the World Cup and try all the possibilities we have," Deschamps said. "We are using this competition the best we can.
At the World Cup in Qatar, France is grouped with Denmark, Tunisia and a yet-to-be-determined team.
The sold-out crowd of some 30,000 cheered Croatia captain Luka Modric in his 150th appearance.
It was a phenomenal feeling, I am happy and proud of my 150th match for Croatia, Modric said.
The first defensive half resulted in only one chance on each side and Nkunku had a goal disallowed for offside.
Rabiot exchanged passes with Ben Yedder, who set him up to find the back of the net with a left-foot shot seven minutes into the second half to put the visitors ahead.
Kramaric calmly sent the goalkeeper the wrong way with a low right-foot penalty seven minutes from time.
LEAGUE B
Iceland midfielder Jon Dagur Thorsteinsson scored four minutes into the second half to salvage a 1-1 draw against Albania in Reykjavik. Taulant Seferi put the visitors ahead in the first half. Iceland leads the group with two points after drawing with Israel 2-2 in its opening game. Israel and Albania have one point each. Russia was suspended from the group following the invasion of Ukraine.
LEAGUES C AND D
Kazakhstan took a three-point lead in Group 3 of League C after a 1-0 away victory at Slovakia, which is second. Belarus drew with Azerbaijan to earn their first point in the same group.
In League D, Latvia made it two wins from two after beating Liechtenstein 1-0. Andorra and Moldova played to 0-0 in the other Group 1 game.