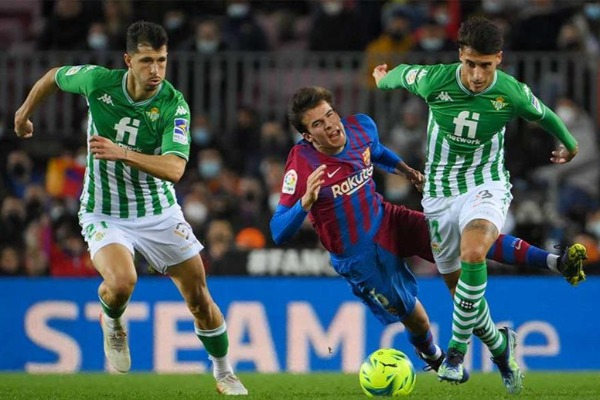 Barcelona lost its first match under Xavi Hern ndez when it fell to Real Betis 1-0 at home just before its critical trip to Bayern Munich.

Striker Juanmi Jim nez finished off a well-orchestrated counterattack to take Betis' winner in the 79th minute at Camp Nou on Saturday night.
Barcelona had won twice and drawn once since Xavi took over as coach from Ronald Koeman. The defeat left the team in seventh place and in danger of falling even further behind leader Real Madrid, which played at Real Sociedad later.
Barcelona visits Bayern on Wednesday needing a win to ensure its place in the Champions League round of 16. Bayern, which is already qualified as the group winner, beat Barcelona 3-0 in their first meeting this season.
If it loses, Barcelona would need Benfica to not beat Dynamo Kyiv to avoid elimination.
Before kickoff, Barcelona player Alexia Putellas presented the 65,000-plus fans her Ball n d'Or for the world's best women's player.
Barcelona lost teen talent Gavi P ez in the 34th when he needed to be carted off after apparently feeling dizzy following the powerful impact of a ball to his head.
Manuel Pellegrini's Betis rose into third place, right behind crosstown rival Sevilla, which beat Villarreal 1-0 thanks to a goal from Lucas Ocampos.
Sevilla and Villareal also have key Champions League matches this week. Sevilla must win at Salzburg to move on, while Villarreal plays Atalanta needing a draw to advance.