We will surprise whole world with our hockey: Pakistan junior team skipper Abdul 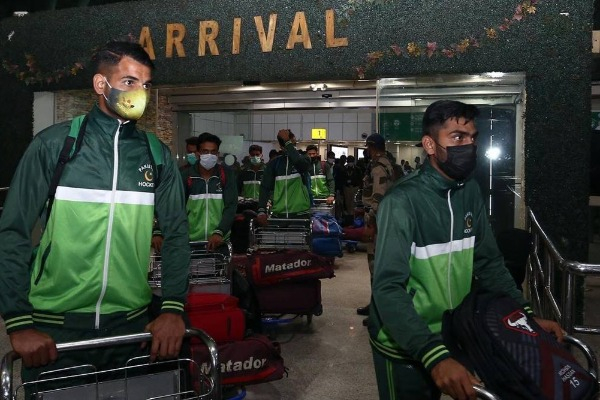 Pakistan team will surprise the entire world with its performance at the upcoming Junior Hockey World Cup, skipper Abdul Rana asserted on Monday.

Three-time former Olympic champions Pakistan have seen a slump in the last few years with the senior team failing to qualify for the showpiece event in the 2016 and 2021 editions.
The country's junior team is now in India to participate in the men's junior World Cup, which begins in Bhubaneswar on Wednesday.
"Our government, senior officials in our federation are putting in a lot of sincere efforts, and I am certain in next 1-2 years you will start seeing Pakistan getting better," Abdul said during a virtual press conference.
"In this tournament also, you will see the Pakistan junior team putting up a good show, you will see a change in Pakistan hockey. The team is playing as a unit and there is a family atmosphere and I am sure Pakistan will surprise the entire world with its hockey."
Coach Danish Kaleem too echoed Abdul's thoughts but added that lack of jobs were also contributing to the decline in the sport in the country.
"Reasons could be many why there has been a decline of Pakistan hockey but I can say this much that the preparation have started for both the senior and junior teams," Kaleem said.
"The top officials are professional people, who are preparing the team so that in the next 1 to 3 years our team start showing better results.
"There are less job opportunities in departments which is also preventing young players from taking up the sport and it is also a factor why hockey went down. But our government has taken note of it and I am hoping in next 1-2 years our team will do well."
Kaleem hoped for a superlative performance from his side.
"Pakistan hockey can go much higher from here and in this event there will be live matches and people back home, including the juniors and U-16, will be watching the players. It is our effort that our players produce good performance and give hope to them," he said.
"If this team does well and gives good results here, it will definitely help our hockey, which is slightly down now."
Pakistan will begin their campaign with a Pool D match against Germany on Wednesday.
"We have prepared well despite the COVID pandemic which has disrupted the world. We had camps and will play with good spirit against Germany," Abdul said.
"COVID affected Pakistan just like it affected the whole world but PHF had organised matches for us against top domestic teams and senior teams.
"We couldn't play international team but I'm hopeful that the preparation that we did at home will reflect in our performance here."
Kaleem, who has been here with the senior Pakistan team in 2018, added: "Keeping the weather conditions in mind, we had camps in Karachi. I told the boys that there is a great audience here (in India) and your impression will matter."
"These guys are going to represent the senior team in future and they need to put up their best performance.