Players to battle out in Mushtaq Ali quarters in 'hazardous' Delhi 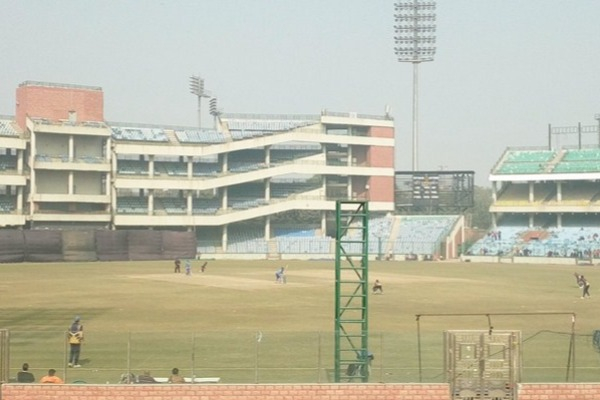 Eighty-eight premier domestic cricketers will battle out in hazardous Delhi air when the four quarterfinals of the Syed Mushtaq Ali tournament kicks off at the national capital here on Thursday.

A toxic haze has enveloped Delhi ever since Diwali with authories in the NCR region making desperate efforts to contain the spiralling air pollution levels.

Despite the toxic air, the pre-quarter finals of the coveted domestic T20 championship were held at the Arun Jaitley stadium and the Airforce ground in Palam without any fuss.
The quarterfinals are also scheduled in Delhi with the two venues hosting two games each, one in the morning and one in the afternoon.
On cricketing front, an unbeaten and fancied Rajasthan will face its toughest opponent when they take on Vidarbha.
For Vidarbha, opener Atharva Taide and skipper Akshay Wadkar are among runs and the duo would like to take on a strong Rajasthan attack, comprising the likes of pacer Tanveer-ul-Haq and leg-spinner Ravi Bishnoi.
The role of middle-order batters Shubham Dubey and Jitesh Sharma, who played a cameo against Maharashtra, would be vital, if the side has to chase or set up a big total.
In the bowling department, left-arm orthodox bowler Akshay Karnewar and seasoned off-spinner Akshay Wakhare, would be key to their success and their eight overs could decide the match's fate.
Young right-arm pacer Yash Thakur's confidence would be bolstered by his three-wicket haul in the pre-quarters, but he would need support from Darshan Nalkande.
For Rajasthan, Deepak Hooda, who shifted from Baroda, has been their batting mainstay and has delivered on every occasion.
But he would need assistance from skipper Ashok Maneria, Mahipal Lomror and others. Their bowlers will also need to bowl in right areas to stop marauding Vidarbha batters.
In another clash, defending champion Tamil Nadu face Kerala in a 'southern derby'.
The Vijay Shankar-led TN team, the Group A topper, appeared in good form save for a shock defeat to Goa, and will need to be at its best against Sanju Samson's team.
Though they will be without the services of B Aparajith, who has been picked for the India A squad, the TN batting has a lot of firepower.
Openers N Jagadeesan and Hari Nishaanth have looked in good touch, so has newcomer Sai Sudarshan and their contribution along with Shankar's will be vital.
Spinner R Sai Kishore has been his usual thrifty self, while leg-spinner M Ashwin has picked up wickets and the duo will be key if TN hopes to restrict Kerala, which boasts of aggressive batters like Sanju Samson and Mohammed Azharuddeen.
Another exciting clash will be on the cards when Karnataka take on Bengal.
Karnataka would be keen to seek revenge against Bengal after losing their last Elite B group game to them in Guwahati.
Karnataka made the quarters after beating Saurashtra in the pre-quarters, while Bengal directly qualified.
Experienced campaigners, Manish Pandey and Karun Nair, who faltered in the pre-quarters, would hope to fire on all cylinders. Equally important would be the role of opener Rohan Kadam and middle-order batters Aniruddha Joshi and Abhinav Manohar, who steered the team to win in the pre-quarters.
Karnataka spinners J Suchith and leg-spinner KC Cariappa will have to bowl in tandem to stop the in-form Bengal line up, which will be bolstered by the inclusion of Shreevats Goswami.
In absence of seasoned pro Abhimanyu Easwaran, other Bengal batters need to come good.
In the last quarter-final, favorites Gujarat would have an edge over Hyderabad, but the southern side can spring a surprise.
Matches:
Rajasthan vs Vidarbha, AirForce ground Palam: 8.30 AM Tamil Nadu vs Kerala: Arun Jaitley stadium: 8.30 AM Bengal vs Karnataka: Arun Jaitley stadium: 1 PM Gujarat vs Hyderabad: AirForce ground, Palam: 1 PM.