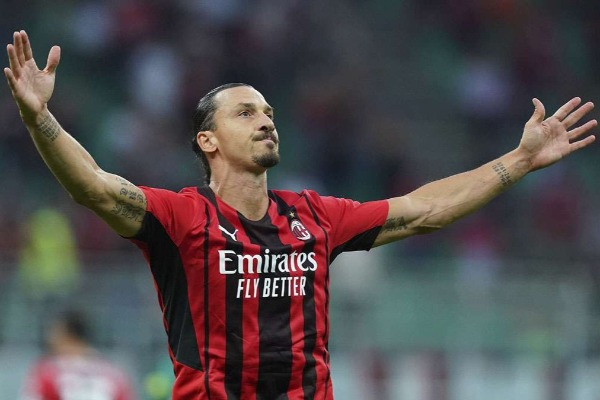 That's all that Zlatan Ibrahimovic required after four months out for a left knee injury including surgery before he scored in his first match back Sunday.

Ibrahimovic came off the bench on the hour mark then quickly redirected a cross from Ante Rebic from close range for AC Milan's second goal in a 2-0 victory over Lazio.
The win extended Milan's perfect start and moved the Rossoneri level with Roma and Napoli atop the Serie A standings through three rounds.
Roma beat Sassuolo 2-1 while defending champion Inter Milan dropped its first points in a 2-2 draw at Sampdoria. Napoli beat Juventus on Saturday.
Ibrahimovic, who turns 40 next month, missed a chance to play for Sweden at the European Championship when he was injured in May during a win over Juventus.
The goal meant that Ibrahimovic has now scored in 24 different league seasons.
"I'm happy that he came back well," Milan coach Stefano Pioli said.
"He entered the game well.
"Beyond the obvious talent, it's the passion and fire he has inside that keeps him going," Pioli said.
"Seeing the way he trains is a pleasure. His goal is to be the best and that hasn't changed as the years go by."
Rafael Le o opened the scoring for Milan just before the break following a give-and-take with Rebic.
Franck Kessi missed a penalty for Milan in first-half added time when he banged his attempt off the crossbar.
Lazio, which won its opening two games, dropped three points back.
Lazio coach Maurizio Sarri was shown a red card after the final whistle as several players, including Ibrahimovic and Lucas Leiva, got into a shoving match.
INTER MISSTEP
Inter Milan made the first misstep of its title defense with a draw at Sampdoria.
The result left the Nerazzurri two points behind the leaders.
With nine goals in its opening three matches, Inter has not had trouble scoring after Romelu Lukaku's departure to Chelsea. But the team missed reliable center back Alessandro Bastoni, who was out with a left thigh injury that he picked up on international duty with Italy.
It remains unclear if Bastoni will return in time for Inter's Champions League opener against Real Madrid on Wednesday at the San Siro.
"It's regretful, because we should have and could have won a game like that," said Inter coach Simone Inzaghi, who replaced the departed Antonio Conte.
"We took the lead twice and we should have closed it out."
Inter played the final minutes with 10 men due to an injury to midfielder Stefano Sensi, who appears doubtful for the Madrid game.
Homegrown talent Federico Dimarco opened the scoring for Inter by curling a free kick around Sampdoria's wall and into the top left corner for a memorable first goal with the senior club.
Maya Yoshida equalized for Sampdoria after the half-hour mark with a shot that was deflected in off Inter striker Edin D eko.
Lautaro Martinez restored Inter's advantage with an expert volley to conclude a counterattack started by Nicol Barella, who provided a laser-like cross.
In a match full of spectacular goals, Sampdoria's Tommaso Augello made it 2-2 with a volley similar to Lautaro's.
MOURINHO'S 1,000th
Jos Mourinho marked the 1,000th game of his coaching career by running the length of the field to celebrate Stephan El Shaarawy's late winner in a 2-1 victory over Sassuolo.
Bryan Cristante had put Roma ahead following a free kick before the break and Filip uricic equalized before the hour mark following an excellent setup from Domenico Berardi.
El Shaarawy's goal came with a curling effort that bounced in off the far post. Roma's entire squad including Mourinho reacted by running down to share the moment before the Curva Sud where the team's ultra fans sit.
Roma, which has won all five of its matches including two UEFA Conference League playoff games under Mourinho, leads Milan and Napoli on goal difference.
It was the 639th win of Mourinho's career.
"During the week, I lied to myself, telling everyone this was not a special game. I was trying to convince myself it was not special. It was a special match," Mourinho said.
"It was a match with a special number for me, which I will remember until the last day of my life.
"I didn't feel 58 today. I felt 10, 12 or 14 years old -- the age when you start to dream of a career in soccer. It was the run of a child."
CONFLICT OF INTEREST
Promoted Salernitana was routed 4-0 at Torino and has now conceded 11 goals and scored only two in three consecutive losses on its return to Serie A for the first time in nearly a quarter century.
Originally owned by Lazio president Claudio Lotito, the Italian Soccer Federation ordered a change in ownership for Salernitana due to conflict of interest rules that prevent multiple teams in the top division from having the same owner.
In June, control of Salernitana was handed over to a trust that must find a new owner by the end of the year.
Elsewhere, an 89th-minute goal from Lazar Samard ic earned Udinese a 1-0 win at Spezia to extend the Friuli club's unbeaten start; and Genoa came back from two goals down for a 3-2 win at Cagliari.