Fifth Test cancelled after India "unable to field team" against England, lead series 2-1 as of now 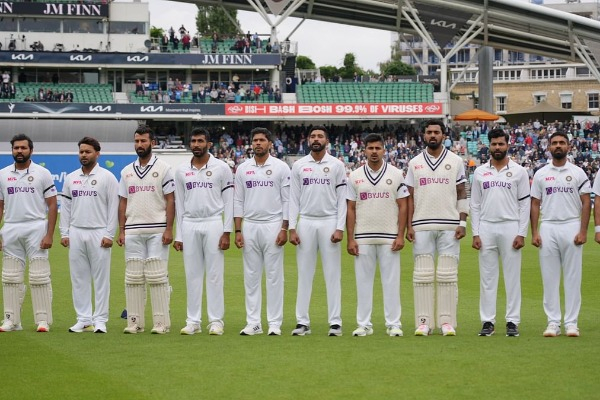 The development came after the touring side was left on tenterhooks following physio Yogesh Parmar's positive COVID-19 test that led to concerns that the infection could spread during the match, which was eventually cancelled a couple of hours before toss.
The initial statement issued by the England and Wales Cricket Board categorically mentioned the word "forfeit" but that was later omitted from a revised media release. Both statements are in possession of PTI.
"Due to fears of a further increase in the number of COVID cases inside the camp, India are regrettably unable to field a team," read the revised ECB statement.
It is learnt that, led by skipper Virat Kohli, who voiced his apprehension strongly, the players, late on Thursday, got into a huddle and couldn't be convinced by the BCCI brass to play the game.
The BCCI issued a statement of its own, hoping that the match could be rescheduled sometime later.
"In lieu of the strong relationship between BCCI and ECB, the BCCI has offered to ECB a rescheduling of the cancelled Test match. Both the Boards will work towards finding a window to reschedule this Test match," BCCI secretary Jay Shah said.
A COVID-related quarantine would have meant missing out on IPL matches, starting September 19. The players are also awaiting reports of a fresh round of tests that have conducted.
"Following ongoing conversations with the BCCI, the ECB can confirm that the fifth LV= Insurance Test between England and India Men due to start today at Emirates Old Trafford, will be cancelled," the ECB stated.
"We send our sincere apologies to fans and partners for this news, which we know will cause immense disappointment and inconvenience to many," it added.
As of now, India are 2-1 ahead and have not been officially declared winners of the series simply because there is a chance of the fifth Test being played during the window in July next year when the team visits for a six-match white-ball series.
Ever since the Indian players refused to play despite testing negative on Thursday, there have been continuous back-channel talks between the two boards.
"The BCCI and ECB held several rounds of discussion to find a way to play the Test Match, however, the outbreak of Covid-19 in the Indian team contingent forced the decision of calling off the Old Trafford Test Match," Shah said.
Ultimately the apprehension expressed by Kohli and Co. took precedence.
"The BCCI has always maintained that the safety and well-being of the players is of paramount importance and there will be no compromise on that aspect," Shah said.
Shah thanked the English board for its understanding of the trying circumstances.
"The BCCI would like to thank the ECB for their co-operation and understanding in these trying times. We would like to apologise to the fans for not being able to complete an enthralling series."
It is understood that the COVID-19 rules for the World Test Championship matches do not include forfeiture and that's where Kohli and his men were able to get their way.
Under the competition terms of the WTC, COVID-19 is identified as "acceptable non-compliance should there be a significant impact of it on the team being able to play."
This is because the match can remain cancelled from the competition and with ICC using percentage points system based on points won in matches played, a cancelled match is of no value to any team.
The Indian players feared that the 96-hour incubation period factored in, they were at risk to return positive during the match and end up in 10-day quarantine, according to BCCI sources.
There were many questions that cropped up during the last 12 hours for BCCI president Sourav Ganguly and Shah with a number of factors being taken into account.
The chances of the IPL's schedule, starting September 19, going haywire were also taken into account as broadcasters and franchises wouldn't have taken the delay lightly.
Also, deferring the game by a day or two would have caused logistical issues as the Indian and English players were supposed to fly together to the UAE in a charter flight.
"There is no guarantee that post Ravi Shastri's book release function which the team attended, there won't be more cases. So players were wary and more so about being in isolation for 10 days," a source said.