Sharath Kamal advances to 3rd round in Olympics; faces Ma Long next 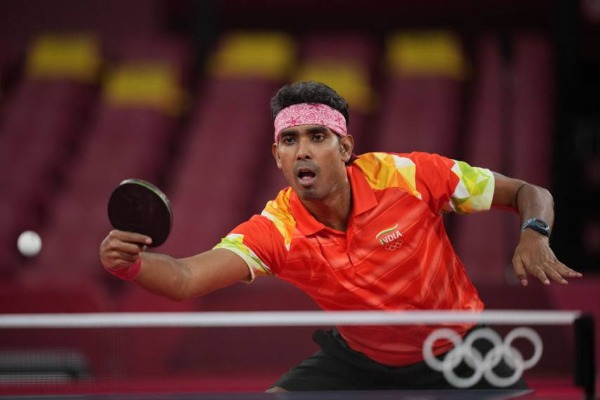 Veteran Indian table tennis player A Sharath Kamal overcame a sluggish start to beat Portugal's Tiago Polonia in the men's singles second round but Sutirtha Mukherjee was overwhelmed by Potugal's Yu Fu in the Olympics, here on Monday.

The 39-year-old Sharath struggled in the first game but pulled himself up just in time to win 2-11 11-8 11-5 9-11 11-6 11-9 in 49 minutes to set up a clash with defending champion Ma Long from China.
Considered one of the greatest players of all time, Long has won every singles title in the sport, and is the reigning world champion as well.
Mukherjee was no challenge to 42-year-old Yu Fu as the China-born bested her in straight sets in the women's singles second round.
Sutirtha, who showed remarkable grit for a come-from-behind win over Sweden's Linda Bergstrom, looked completely off-colour to lose 3-11 3-11 5-11 5-11 in a 23-minute affair against the world number 55.
The Indian world number 98 managed just two points on her serve to lose the first game in no time.
Sutirtha took a timeout trailing 1-4 in the third game to talk to her coach Soumyadeep Roy, seemingly to upset the rhythm of Yu-Fu but the veteran kept going strong.
Top-ranked Indian Manika Batra faces Austria's Sofia Polcanova in her round three fixture later in the day.
G Sathiyan has exited the competition after losing his men's singles second round.