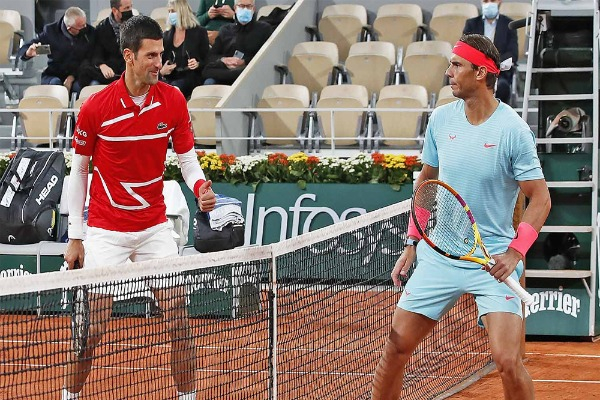 Maybe the new generation of tennis players isn't quite so ready to end the eras of Novak Djokovic and Rafael Nadal.

Titles for Stefanos Tsitsipas and Alexander Zverev in the Monte Carlo Masters and Madrid Open, respectively, raised speculation again that the Big Three including 39-year-old Roger Federer was expiring.
Well, again, not yet.
Djokovic, who turns 34 in a week, and Nadal, who turns 35 next month, won a total of three matches over younger players on Saturday and will renew their record-setting rivalry in the Italian Open final on Sunday exactly two weeks before Roland Garros starts.
Rafa and I had a little laugh today in the locker room after I won against Tsitsipas, Djokovic said.
We kind of joked around about, you know, that the old guys are still not giving up.
(Nadal) said somewhere a few days ago that Roger, him and I are old. But I disagree with him. We're showing some different, fresh energy.
They took vastly different paths to the final.
Djokovic regained his cool after throwing his racket off the court to beat Tsitsipas 4-6, 7-5, 7-5 in a grueling, rain-delayed quarterfinal that began on Friday.
Then the top-ranked Serb returned a few hours later against local favorite Lorenzo Sonego and wasted a late break and two match points in the second set of a 6-3, 6-7 (5), 6-2 victory in his second match of the day.
In all, Djokovic spent nearly five hours on court.
First of all I need to recover. I don't have much time, Djokovic said.
Hopefully I'll have fresh legs, because that's what I'll need to play against Rafa.
Nadal kept his time on court to a minimum by ending the surprising clay-court run of big-serving American Reilly Opelka by 6-4, 6-4.
I played the match that I had to play, Nadal said. I had two breaks (in) two sets. That's a positive thing for me. (Being) in the final again here means a lot."
A day earlier, Nadal eliminated Zverev in straight sets.
In terms of preparation for Roland Garros, I consider the job done, Nadal added.
Tomorrow is not at all preparation. ... (It's) a final, an important one, and I want to be competitive.
Djokovic and Nadal have met an Open-era record 56 times, with Djokovic leading the series 29-27. Their previous meeting came in last year's French Open final, where Nadal won in straight sets. It will be the sixth time they meet in the Rome final, with Nadal holding a 3-2 edge.
Definitely my biggest rival of all time, Djokovic said.
Even after all we have been through in our careers, there is still this excitement when we have to face each other. That's going to be the case as long as we play each other on this level.
And I'm really glad that we're showing that we're not backing off on the Next Gen attacks.
Nadal has won the Italian Open a record nine times, while Djokovic has five titles at the Foro Italico.
The women's final will feature French Open champion Iga Swiatek against 2019 Rome champion Karolina Pliskova.
Swiatek also had to play twice on Saturday. First, she eliminated two-time Rome champion Elina Svitolina 6-2, 7-5 then she beat 17-year-old Coco Gauff 7-6 (3), 6-3.
Pliskova reached her third consecutive Rome final by outlasting Petra Martic 6-1, 3-6, 6-2.
The 6-foot-11 (2.11-meter) Opelka hadn't dropped a set this week and threatened early against Nadal with a series of huge forehands. But Nadal saved four break points in the fourth game of the match then broke in the next game to take control.
Djokovic fought back from breaks of his serve in each of the final two sets against Tsitsipas.
I'm just really, really glad to overcome this challenge, Djokovic said.
"It's probably the toughest match of the year for me so far.
Sonego was backed by a loud crowd when he rallied past seventh-ranked Andrey Rublev 3-6, 6-4, 6-3 to reach his first Masters semifinal. Their match was washed out Friday.
Fans were allowed to fill 25% of capacity as part of the Italian government's reopening plan.
Against Djokovic, Sonego urged the crowd to get louder in the key moments but ultimately Djokovic's experience paid off as the Serb gained a measure of revenge after getting routed 6-2, 6-1 by the Italian in Vienna last year.
It was an electric atmosphere out there on the court, Djokovic said.