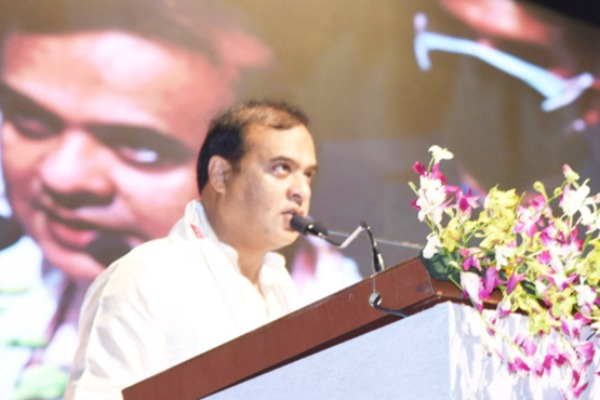 Sarma, clad in traditional 'pat silk' dhoti and kurta with a muga 'gamosa' draped around his neck, took the oath of office and secrecy in Assamese.
Along with him, 13 other legislators were also sworn- in as ministers amid strict COVID-19 protocols.
Among the MLAs sworn-in, 10 from the BJP, including state party president Ranjeet Kumar Dass and ministers of the outgoing government Chandra Mohan Patowary, Parimal Suklabaidya, Jogesh Mohan and Sanjay Kishan.
The new faces as ministers were Ranoj Pegu, Bimal Borah and the only woman in the cabinet, Ajanta Neog.
Alliance partner AGP's Atul Bora and Keshab Mahanta, both ministers in the erstwhile government, and former Rajya Sabha MP U G Brahma of the UPPL, also took oath.
BJP president J P Nadda, outgoing Chief Minister Sarbananda Sonowal, Union ministers Jitendra Singh and Ramesh Teli, Nagaland Chief Minister Neiphu Rio and Assam Congress chief Ripun Bora were among those present at the swearing-in ceremony.
Of the 126 assembly seats in Assam, the ruling alliance secured 75 seats with the BJP winning 60, the AGP (9) and the UPPL (6).
The BJP alliance is the first non-Congress government in the state to win the elections for the second consecutive term.