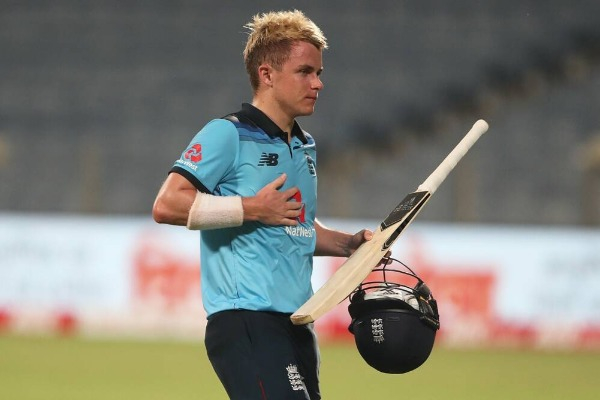 In pursuit of 330, England slumped to 168 for six at the midway stage but Sam, who came into bat at No. 8, took them to the verge of an unlikely win with his counterattacking knock.
"Sam played an outstanding innings there and will take a lot from that moving forward, even though there's the disappointment of losing the game," Buttler said at the post-match press conference on Sunday night.
"I'm sure there were shades of the way that he (MS Dhoni) would have liked to take the game down if he was in that situation. He's a great person for Sam to have a conversation with when he meets up MS (in the IPL)."
"He's a real impact player in the game. He will just continue to get better and better. He is still only 22 and the scope of where you can take his game to is massive. So we're all very excited for him."
India won a close game by seven runs despite Sam's exploits with the bat.
Continuing his praise for Sam, Buttler said: "Many guys are never really exposed to that kind of situation in their whole career. He will take great learning from that. I can't think of many times myself I've ever been in those situations.
"All of us in the team and the squad will have taken great learning from watching him and trying to think through how we would take that situation down individually as well."
The pace bowling all-rounder not only notched his career-best score but also dismissed the dangerous-looking Rishabh Pant for a 62-ball 78.
"Sam just keeps showing what a match-winner he is really. He came up with Rishabh Pant's wicket as well. He takes big wickets whether it's a Test, ODI or T20.
"We're all very proud of the way Sam played, showed all the traits that we know he has in abundance and the character and the skill level that embodies what we're about as a team."
In contrast to the Test series that India won handsomely by a 3-1 margin, England showed resistance in the white-ball leg, even as they lost in both the 20-over and 50-over rubbers.
Buttler, who led the side after Eoin Morgan suffered a split-webbing in the first ODI, said there were a lot of positive takeaways.
"There'll be some great learnings taken from the tour, and some great exposure to players playing in this part of the world for the first time," he said, referring to the impressive performances from Dawid Malan and Liam Livingstone, who made his ODI debut in the second match.
"We've expanded the talent pool available to us in one-day cricket, building ahead to the T20 World Cup in a few months' time and, of course, the 2023 World Cup later on down the line as well.
"So anytime we expand that player pool, that creates competition, that creates better performances, and that's the upward trajectory that we're always after as a side, that continuous improvement," he added.
The loss meant that the reigning world champions have now suffered successive ODI series defeats. They had earlier lost to Australia by the same 1-2 margin at home.
"We've been a brilliant side for a long time now... We've lost two series now but it's two series in the last 11, I wouldn't read too much into it."
Apart from Morgan, England also had pace spearhead Jofra Archer on the injured list, while Joe Root and Chis Woakes were rested as part of their rotation policy.
"We are still a very good side and we're expanding the talent pool with a few guys missing and few other guys getting opportunities."
"It's a long cycle looking ahead to the next World Cup (in 2023) and of course you want to learn and win at the same time.
"We're disappointed when we don't do that but there's a big picture. I think we're in a good place," he concluded.