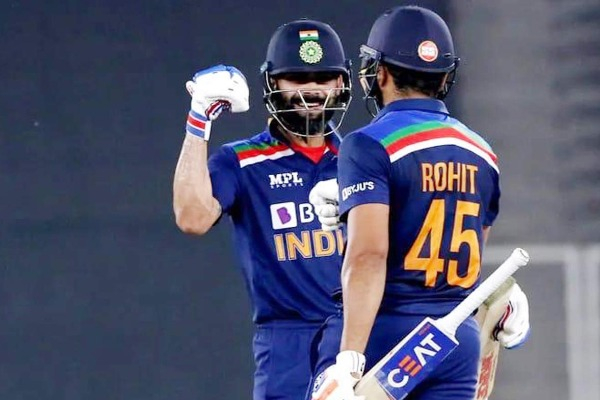 To inflict maximum damage to the rival teams during the T20 World Cup, aggressive India skipper Virat Kohli is planning to open with flamboyant Rohit Sharma in the ICC tournament, scheduled to be held in country later this year.

Kohli expressed his desire after he opened with Rohit in the final T20 against England on Saturday. They added 94-run for the first wicket in quick time as India posted a massive 224 for 2 and won the match by 36 runs.
"I am going to open in IPL as well. I have batted in different positions in the past. But I feel we have a solid middle order now. So, I will definitely like to partner Rohit at the top going into the T20 World Cup," Kohli said at the post-match presentation.
"Two best batsmen in the team, one can play second fiddle if the other gets going. That can inflict a lot of damage to the opposition team. Other guys also feel a lot more confident when one of us is still in and is set."
Talking about the partnership with Rohit which set laid the foundation of a big total, Kohli said, "Today Rohit and me were both positive in our intent. We knew we could trust each other and one of us can play second fiddle if one takes off."
"Today it was classic Rohit Sharma. And then Surya coming in at three and taking the game even further away. Then Hardik finishing it. Augurs well for the team," said Kohli who remained not out on 80 from 52 balls.
Kohli, who was named player of the series for scoring 231 to top the run chart at an average of 115.50, said it was a complete game for the team.
"It was a complete game for us. Totally outplayed the opposition. Even with so much dew coming in, like last game we've defended the total again. Despite Rishabh and Iyer not getting a chance (to bat) we put on 225," said the captain.
"It's a testimony to our batting depth."
Talking about other players, he said, "Also how Shreyas batted in the last game and the responsibility he showed in the first game. Ishan (Kishan) was brilliant. I was particularly pleased with Surya."
"Bhuvi coming back and bowling like that. Still have Jassi (Jasprit Bumrah) to come back. Don't have much in terms of negatives. Pant showed a lot of maturity through the series as well.
"Confidence level of (Shardul) Thakur after that series in Australia is sky high. With the ball, his strength is his belief. Proper cricketer. Giving us runs with the bat as well."
He said the T20 World Cup squad is more or less sorted out.
"Just found out we might have some more (T20Is).