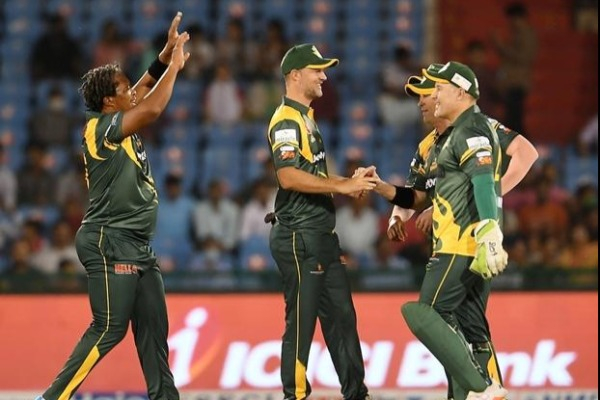 Openers Andrew Puttick (84 not out off 54 balls; 9x4, 1x6) and Morne van Wyk (69 not out off 62 balls; 9x4) slammed unbeaten half centuries as South Africa Legends chased down the 161-run target in 19.2 overs late on Monday.
The win helped the South Africans finish third with 16 points after India (20 points) and Sri Lanka (20 points).
Earlier, put in to bat, Bangladesh Legends displayed a much-improved batting performance before South Africa Legends bowlers triggered a collapse.
The Mohammed Rafique-led side were restricted to 160 for 9 in 20 overs with South Africa Legends offie Thandi Tshabalala and pacer Makhaya Ntini taking two wickets each.
Nazimuddin provided a decent start with a 33-ball 32 with five fours and a six while Aftab Ahmed (39; 1x4, 3x6) and Hannan Sarkar (36; 2x4, 1x6) were the other main contributors.
Nazimuddin, however, was dismissed by Tshabalala while Ahmed and Sarkar were sent back by Zander de Bruyn and seamer Garnett Krugger.
Once Sarkar was dismissed at the team score of 130, Bangladesh lost six wickets for 30 runs.
Brief Scores:
Bangladesh Legends: 160/9 in 20 overs (Nazimuddin 32, Aftab Ahmed 39, Hannan Sarkar 36; Makhaya Ntini 2/26, Thandi Tshabalala 2/33) lost to South Africa Legends 161/0 in 19.2 overs (Andrew Puttick 84 not out, Morne van Wyk 69 not out) by 10 wickets.