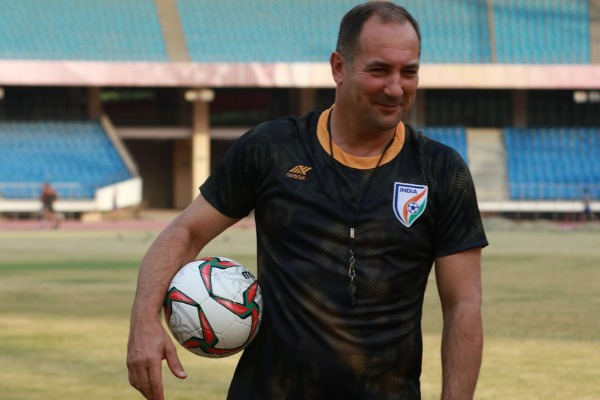 National football coach Igor Stimac on Tuesday named 10 new players in his 35-member list of probables for India's back-to-back international friendlies against Oman and the UAE to be played in Dubai on March 25 and 29 respectively.

The final list of 28 players will be announced after the Indian Super League final on March 13. The players will then assemble for a preparatory camp in Dubai from March 15.
"We have kept 35 players in the list as a cushion in case any player picks up an injury during the ISL playoffs," Stimac said in a release.
Speaking about the new faces, Stimac said: "It's been a difficult year for all of us and finally, we are all getting together. It will be great to meet some new young guns and to check how bright our future is with them."
The Croatian World Cupper said the two matches against Oman and the UAE would be crucial as the team has not played any international match for more than a year.
"It's been a while since we last played and this is a great opportunity to check where we stand at the moment," the coach said.
"I know the season was a tough one and players might be overloaded. But, we have enough time to refresh their legs and brains. However, many of them will have a break of two weeks without any organised training sessions prior to joining the camp. Hopefully, they will execute their individual working plans," he said.
Stimac said Brandon Fernandes, Rahul Bheke, Sahal Abdul Samad and Asish Rai did not feature in the list as they are nursing injuries at the moment.
It was in November 2019 that India last played at the international arena -- in the 2022 FIFA World Cup Qualifiers against Afghanistan (in Tajikistan) and Oman (in Muscat).
India have garnered three points from the five matches they have played so far in the qualifiers, with two home games against Asian champions Qatar and Afghanistan and an away tie against Bangladesh yet to be played.
The international friendlies against Oman and the UAE form a part of India's preparations for the 2022 FIFA World Cup and 2023 Asian Cup Qualifiers to be played in June.
India are out of reckoning for a 2022 World Cup berth but are still in contention for qualification in the 2023 Asian Cup.
The Probables:
Goalkeepers: Gurpreet Singh Sandhu, Amrinder Singh, Subhashish Roy Chowdhury, Dheeraj Singh, Vishal Kaith.
Defenders: Seriton Fernandes, Ashutosh Mehta, Akash Mishra, Pritam Kotal, Sandesh Jhingan, Chinglensana Singh, Sarthak Golui, Adil Khan, Mandar Rao Dessai, Prabir Das, Mashoor Shereef.
Midfielders: Udanta Singh, Rowllin Borges, Lalengmawia, Jeakson Singh, Raynier Fernandes, Anirudh Thapa, Bipin Singh, Yasir Mohammad, Suresh Singh, Liston Colaco, Halicharan Narzary, Lallianzuala Chhangte, Ashique Kuruniyan, Rahul KP, Hitesh Sharma, Farukh Choudhary.
Forwards: Manvir Singh, Sunil Chhetri, Ishan Pandita.