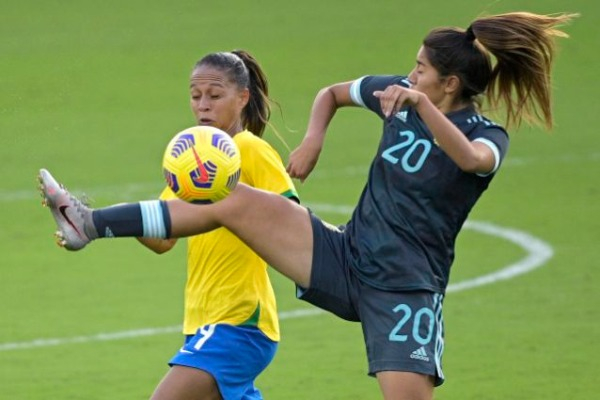 Marta scored on a penalty kick in the 30th minute and Brazil went on to defeat Argentina 4-1 in the opening match of the SheBelieves Cup.

Marta, the six-time FIFA World Player of the Year, now has 109 career goals for Brazil. Debinha and Adriana added early second-half goals for Brazil, which is coached by former US national team coach Pia Sundhage.
Mariana Larroquette scored for Argentina in the 60th minute on Thursday to close the gap before Geyse added Brazil's final goal.
The United States was set to play Canada in the second match of the doubleheader at Exploria Stadium on Thursday night. The round-robin tournament continues Sunday.
Four Argentina players were ruled out of the match because of coronavirus protocols. One player tested positive and was isolated as well as being declared ineligible for the tournament.
Another player was isolated after inconsistent test results. Contact tracing ruled out two additional players for Thursday's match. The impacted players were not named.
Goalkeeper Laurina Oliveros was named to Argentina's squad as an emergency replacement for the player ruled out for the tournament.