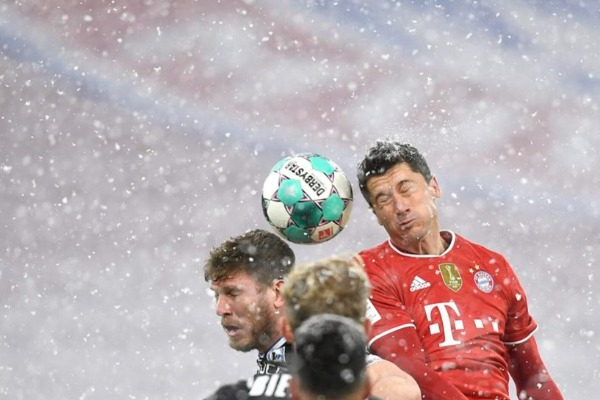 Bayern Munich returned from Qatar to heavy snowfall and a setback as it was held to a 3-3 draw at home by promoted Arminia Bielefeld in the Bundesliga.

Robert Lewandowski, Corentin Tolisso and Alphonso Davies scored as Bayern fought back from two goals down to avoid defeat on Monday, four days after winning the Club World Cup in Qatar.
We had a few players to replace and the team's mentality in the second half was sensational, Bayern coach Hansi Flick said after the end of his team's five-game winning run.
Today we have to be satisfied with the point.
Bielefeld would have left the relegation zone with a win but had a fourth goal ruled out by a VAR decision.
Dutch forward Michel Vlap gave the visitors the lead in the ninth minute when he turned and shot from 15 meters to mark his debut with a goal.
Bayern goalkeeper Manuel Neuer roared at his defenders, furious that Vlap had been allowed the space to turn after a mix-up between Niklas S le and Bouna Sarr. The latter was making just his fourth league appearance of the season, one of three changes that Flick made from the team that beat Tigres 1-0 in the Club World Cup final.
Sarr, Tolisso and Eric-Maxim Choupo-Moting started for Bayern in place of Benjamin Pavard, Joshua Kimmich and the injured Serge Gnabry.
The snowfall became heavier and the white ball was becoming increasingly hard to see before it was changed for an orange one in the 13th. Then there was a brief holdup for the pitch lines to be cleared of snow.
Bayern struggled to respond. Leroy San failed to beat the goalkeeper in a one-on-one after Lewandowski played him through, though the linesman raised his flag for offside anyway.
Then Bielefeld shocked the defending champions again. Vlap sent in a corner that the unmarked Amos Pieper headed in from close range. S le and David Alaba had left the Bielefeld defender free.
The pitch was cleared at halftime and the game restarted without snow. The sense of normal service resuming was completed when Lewandowski controlled Alaba's cross on his chest and turned to volley the ball inside the far post three minutes into the second half. It was the Poland star's 25th goal of the season.
Once the snow was gone, it got hard for us, Bielefeld captain Fabian Klos said.
But Bielefeld replied a minute later, Andreas Voglsammer sprinting down the left before crossing for Christian Gebauer to make it 3-1.
San crossed for Tolisso to head in Bayern's second goal in the 57th, and Alphonso Davies equalized in the 69th.
Lewandowski almost grabbed Bayern's fourth shortly afterward, before Bielefeld substitute Sergio C rdova had a goal at the other end ruled out for offside. Replays showed it was a close call.
Bayern remained five points clear of second-place Leipzig.