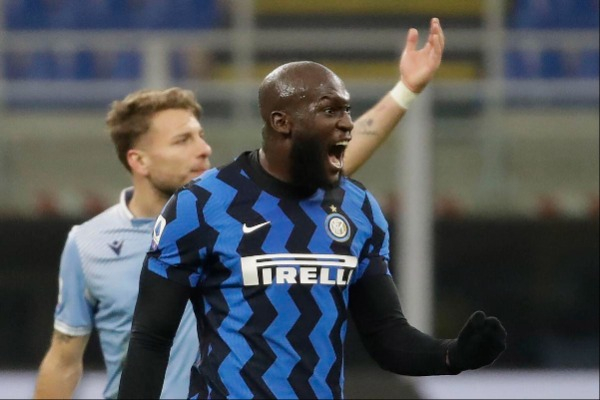 Romelu Lukaku scored twice and took his tally to 300 career goals as Inter Milan moved top of Serie A with a 3-1 win over Lazio on Sunday.

Lukaku netted a penalty and doubled his tally at the end of the first half with the landmark goal. He also set up Lautaro Mart nez for Inter's third, shortly after Gonzalo Escalante had given Lazio hope.
"Romelu struggled a bit lately but it's normal to have dips in form," Inter coach Antonio Conte said.
"We need this type of Romelu, he's back to his usual standards."
Inter leapfrogged a point above AC Milan, which surprisingly lost 2-0 at Spezia on Saturday. The two teams meet in the Milan derby next Sunday.
"This has to be a starting point for us ... otherwise all the work that we are doing will have been in vain," Conte said.
"Going into the derby in first place is much better. It will be a good match between two teams with great ambitions."
Lazio is seventh, 10 points below Inter.
Coming into the match, Inter knew it could take a confidence-boosting step in the title race but Lazio was on a run of six straight wins.
Both sides had chances before Inter was awarded a penalty for a mistimed tackle by Wesley Hoedt on Mart nez. Lazio protested fiercely but to no avail and Lukaku struck the spot kick into the bottom left corner.
The 27-year-old Belgian doubled his tally with another controversial moment on the stroke of half-time, slotting in after Marcelo Brozovic's interception was deflected into his path by a Lazio player. The goal was initially ruled out for offside but awarded on video review.
That was Lukaku's 300th goal, between club and country.
Lazio briefly threatened a comeback when Escalante deflected in Sergej Milinkovic-Savic's free kick in the 61st but Inter restored its two-goal advantage just three minutes later.
Lukaku burst down the right, holding off a defender as he raced from inside his own half into the penalty area before rolling across for Mart nez to tap into an empty net.
LIVELY VERETOUT
Jordan Veretout scored twice to help Roma beat Udinese 3-0 and move third in the league.
Roma leapfrogged nine-time defending champion Juventus and is seven points behind Inter. Udinese came into the match on the back of three successive clean sheets but it took Roma just five minutes to end that streak when Veretout headed home Gianluca Mancini's cross from the right.
Veretout doubled his tally 20 minutes later from the penalty spot after Udinese goalkeeper Juan Musso brought down Henrikh Mkhitaryan
Pedro added a third for Roma in stoppage time with a delightful strike into the top right corner after he was set up by fellow substitute Edin D eko.
SUPER SUB
Luis Muriel again came off the bench to score a last-gasp winner for Atalanta in a 1-0 victory at relegation-threatened Cagliari.
Muriel has earned himself the reputation of super sub' and it again proved the case in Sardinia. Atalanta appeared more dangerous when he came on in the 68th and the Colombia forward netted in the final minute.
Muriel collected a long, cross-field pass, wriggled between two Cagliari players and slammed home a powerful shot.
Cagliari thought it had been given a stoppage-time chance to equalize when it was given a penalty after Marten de Roon appeared to trip Daniele Rugani but it was rescinded after the referee reviewed the incident on the pitchside monitor.
Atalanta is sixth, above Lazio on goal difference and below Napoli, also on goal difference. Head-to-head is the first tiebreaker at the end of the season. Cagliari remained two points from safety.
Fiorentina is seven points above the relegation zone after losing 2-1 at Sampdoria. Last-place Crotone lost 2-1 at home to Sassuolo.