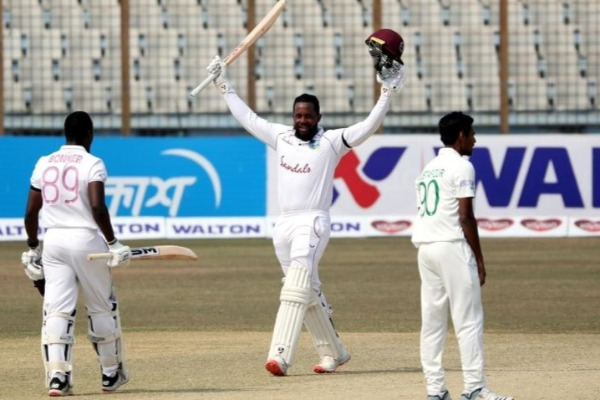 Kyle Mayers became only the eighth batsmen to hit a fourth innings century on debut as West Indies kept its victory hopes alive on the final day of the first cricket test against Bangladesh.

At tea on Sunday, West Indies were 266-3, still needing 129 runs from a minimum of 34 overs to win after Bangladesh set a 395-run target.
Mayers was unbeaten on 117 already the highest score by a debutant in a fourth innings sharing an unbroken record 207-run partnership with another debutant Nkrumah Bonner (79 not out). It is the West Indies' highest 4th innings partnership for any wicket since 1984.
Resuming the day on 110-3, Mayers and Bonners survived some tricky moments in the first hour of the game, with offspinner Mehidy Hasan (3-92) and left arm spinner Taijul Islam keeping it tight.
Mayers brought up his century off 177 balls, after getting an outside edge that flew past gully for his 13th boundary.
While Mayers decided to counterattack, Bonner chose to defend with his 79 coming off 242 balls, with 10 boundaries.
On Saturday, Bangladesh declared its second innings on 223-8 after skipper Mominul Haque struck his 10th test century.
Off-spinner Mehidy Hasan then continued his good recent form for Bangladesh taking three wickets to reduce the tourists to 110-3 at stumps on day four, still needing 285 runs to win or needing to bat at the final day to salvage a draw.
Bangladesh scored 430 in its first innings before gaining a 171-run lead after dismissing West Indies for 259 runs.