Bar a misses 2 penalties but advances past Cornell in Copa 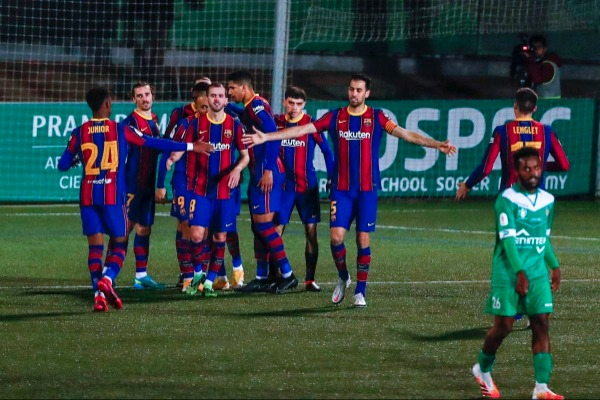 Ousmane Demb l scored early in extra time after missing a penalty late in regulation as Barcelona defeated third-division club Cornell 2-0 in the round of 32 of the Copa del Rey.

Martin Braithwaite also scored on Thursday for Barcelona, which had already seen Miralem Pjanic miss a penalty in the first half.
In the Spanish league, Luis Su rez scored twice as leader Atl tico Madrid came from behind to defeat Eibar 2-1 and open a seven-point gap to second-place Real Madrid.
Barcelona avoided an upset in the Copa del Rey a day after Madrid lost 2-1 to third-division club Alcoyano in extra time. Atl tico had already been stunned by Cornell in the second round.
Barcelona advanced despite playing without Lionel Messi, who was suspended for two matches after hitting an opponent away from the ball in the team's 3-2 loss to Athletic Bilbao in the Spanish Super Cup final on Sunday.
Demb l scored with a right-foot shot from outside the area two minutes into extra time. He had his 80th-minute penalty saved by Cornell goalkeeper Ram n Juan
Ram rez, who also stopped Pjanic's spot kick just before halftime.
Barcelona controlled possession but struggled to capitalize on its many scoring chances on the artificial turf at the small Cornell stadium in Catalonia. The hosts threatened a few times on counterattacks.
Cornell went a man down when Albert Estelles was sent off with a second yellow card in the final minutes.
Braithwaite's goal came on a breakaway just before the final whistle.
SU REZ SAVES ATL TICO
Su rez scored a goal in each half after Eibar had taken the lead with a penalty converted by goalkeeper Marko Dmitrovic in the 12th minute.
Su rez equalized in the 40th with a low cross shot from close range after the Eibar defense failed to clear the ball from inside its area. The Uruguay striker netted the winner by converting an 89th-minute penalty after he was fouled inside the area.
It was the sixth league win in a row for Atl tico, which still has a game in hand compared to Real Madrid and third-place Barcelona, which is 10 points off the lead.
"We have to understand that it's very difficult to win these matches," Su rez said.
"We need to keep playing at a high level if we want to achieve our goals."
Eibar, winless in three matches in all competitions, was in 15th place, two points from safety.
LACKLUSTER DRAW
In a match between clubs fighting against relegation, Valencia was held to a 1-1 draw against Osasuna.
Jonathan Calleri put the visitors ahead with a volley in the 42nd and Valencia equalized with an own goal by Osasuna defender Unai Garc a in the 69th.
Winless in 13 consecutive league games, Osasuna stayed second-to-last in the 20-team standings. Valencia was 14th, three points from the relegation zone.