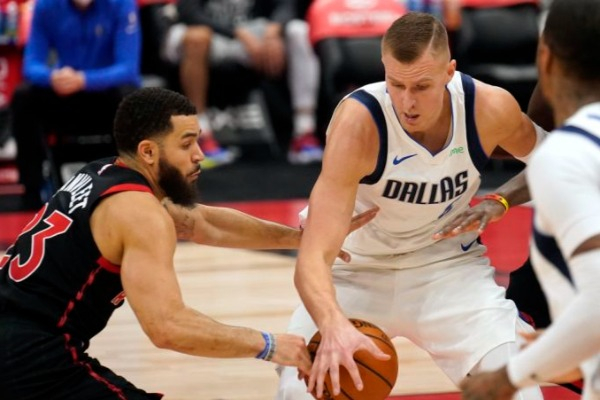 Kyle Lowry scored 23 points and Pascal Siakam had a big second half, leading the Toronto Raptors to a 116-93 win over the Dallas Mavericks.

Siakam scored 15 of his 19 points in the second half as the Raptors pulled away for their third straight victory on Monday night. Chris Boucher added 21 points and OG Anunoby contributed 13 points, 11 rebounds and much of the defensive work against Dallas star Luka Doncic.
Doncic, who was coming off a 36-point, 16-rebound, 15-assist triple-double in Sunday's 117-101 loss to Chicago, scored 15 points on 4-for-11 shooting and added seven rebounds and nine assists.
Kristaps Porzingis led Dallas with 23 points and nine rebounds. The Mavericks shot 37.8% with 23 turnovers and lost their third straight.
Dallas coach Rick Carlisle was ejected in the first quarter.
The game was tied 47-47 after a first half in which the Raptors shot 11.8% (2 for 17) from behind the arc and 19 for 32 (59.4%) from inside it.
Siakam's short jumper midway through the third quarter broke a 59-all tie and launched a 16-2 run that put the Raptors up to stay.
Boucher and Norman Powell (17 points) led an early fourth-quarter rally that put the game away.
Carlisle's ejection came with 58.4 seconds left in the first quarter, just after Powell had converted a running shot in the lane after a Dallas turnover. TIP-INS
Mavericks: G Josh Richardson, F Maxi Kleber, F Dorian Finney-Smith and F-C Dwight Powell, all of whom were among the team's top 10 in minutes played, remained sidelined on COVID protocol. ... G Tim Hardaway, who had missed Sunday's game with a strained left groin, played 27 scoreless minutes and shot 0 for 12.
Raptors: Toronto shot 10 for 16 from long range in the second half. ... C Alex Len missed a third straight game for personal reasons.
UP NEXT
Mavericks: Visit Indiana on Wednesday night. The Mavericks won without Doncic (right ankle sprain) in their last trip to Indianapolis on Feb. 3, 2020.
Raptors: Conclude a five-game homestand with a two-game set against Miami on Wednesday and Friday nights.