Liverpool loses at Southampton 1-0 to extend blip in EPL 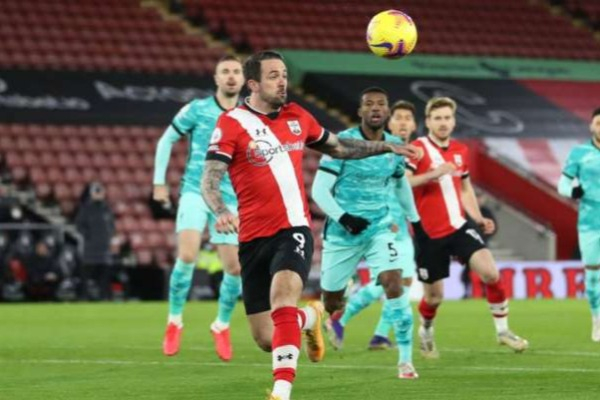 Southampton manager Ralph Hasenhuttl slumped to the ground, pulled down the bill of his cap, and wept after another big win for his team in the English Premier League.

On the receiving end this time was Liverpool, which also appears to be on its knees in what is shaping up to be the most open title races in years.
Danny Ings, a former Liverpool player, scored in the second minute to lead Southampton to a 1-0 win over the champion at an empty St. Mary's Stadium on Monday.
Liverpool has gone three games without a win after back-to-back draws against West Bromwich Albion and Newcastle and leads on only goal difference from great rival Manchester United, which has played one game fewer.
United isn't the only team in striking distance of the lead approaching the halfway point of the league. Four points separate Liverpool from seventh-placed Everton, with 10th-placed West Ham only seven points off the lead in what was always going to be a disjointed season amid the pandemic.
Southampton is in the mix, its latest win lifting Hasenhuttl's team to sixth place in a season when it has been in first place albeit briefly for the first time since 1988. It all proved too much for the emotional Hasenhuttl at the final whistle.
Few could have foreseen this sudden drop-off by Liverpool, which has failed to score in successive games for only the second time in Jurgen Klopp's five-year tenure.
Indeed, such has been Liverpool's lack of cutting edge of late that Klopp's team has managed just seven shots on target in the past three games.
Southampton was depleted for the game, missing the spine of its team with first-choice goalkeeper Alex McCarthy (coronavirus), central midfielder Oriol Romeu (hamstring) and striker Che Adams (concussion) joining giant center back Jannik Vestergaard on the sidelines.
But the Saints still had Ings, who latched onto a free kick by James Ward-Prowse and lifted a bouncing ball over goalkeeper Alisson Becker and into the far corner.
It was attack vs. defense from then on but Southampton held firm, with center backs Jack Stephens and Jan Bednarek, in particular, outstanding.
You know exactly what you are going to get from them," Klopp said of Southampton.
"You cannot be surprised but we looked surprised.
At the beginning how we played, where we lost the balls, it's not rocket science. We should have done much better. We played into their hands with the start.