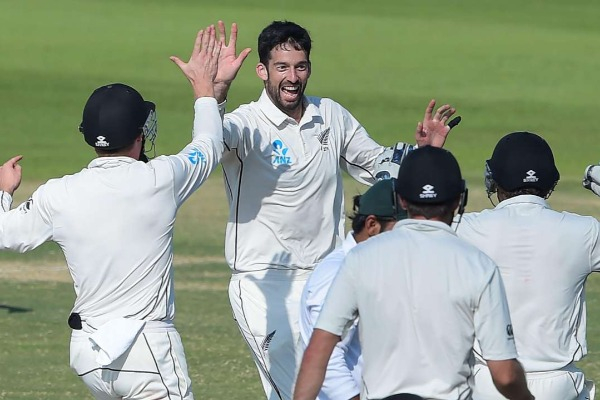 New Zealand set Pakistan 373 to win the first cricket test from at least 136 overs when it declared Tuesday just before tea on the fourth day.

After leading by 192 on the first innings, dismissing Pakistan for 239 in reply to its 431, New Zealand declared its second innings at 180-5.
The declaration by captain Kane Williamson came 30 minutes before tea, giving the New Zealand seamers a brief tilt at the Pakistan openers before the break.
New Zealand then dismissed both Pakistan openers in five overs before tea, leaving Pakistan in trouble at 4-2.
Trent Boult dismissed Abid Ali with only the second ball of his first over and Tim Southee removed Shan Masood in the next over.
Abid was caught by wicketkeeper B.J. Watling diving in front of first slip, giving Watling his 250th test catch. Masood played an uncertain shot outside off stump and was caught at first slip by Ross Taylor.
Earlier, New Zealand openers Tom Blundell and Tom Latham made the declaration possible with a 111-run partnership for the first wicket. Both batsmen made half centuries; Blundell was 64 when he was the first man out in the 33rd over and Latham followed for 53.
New Zealand then went on the offensive as it sped towards the declaration.
Williamson made 21 from 33 balls, Henry Nicholls 11 from five balls and B.J.Watling 5 from three balls before he was run out pushing the pace.
Ross Taylor had made 12 from 13 deliveries and Mitchell Santner 6 from 5 balls when the declaration was made.
The winning target was lower than many experts had thought likely, given there are still four full sessions remaining in the match.
Latham and Blundell appeared to show that relatively quick scoring they progressed at better than three runs per over was still possible on a flattening wicket.
Pakistan may be better advised to chase the winning total, rather than to concentrate solely on survival and a draw as the pitch continues to offer assistance to seam bowlers. Boult and Southee found bounce and swing in the 20 minute period before tea.
New Zealand can't afford a draw. It must win this match and the second test to have any chance of qualifying for the World Test Championship final at Lord's in June.
New Zealand is third in the championshp rankings after its 2-0 clean sweep of the West Indies this summer. It needs another clean sweep over Pakistan to have a chance of displacing Australia or India in the world championship final in June.