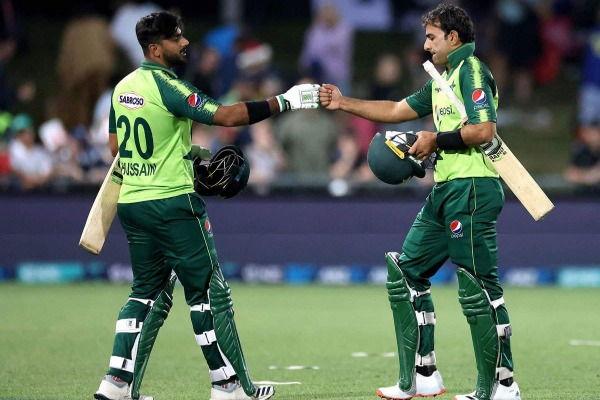 New test captain Mohammad Rizwan showed his leadership quality in a bold innings of 89 which steered Pakistan to a four-wicket win over New Zealand in the third Twenty20 on Tuesday.

Rizwan will lead Pakistan in the two-match test series against New Zealand starting on Sunday in place of Babar Azam, who is injured.
In Azam's absence he also opened the batting in all three T20s, making 17 in Auckland and 22 in Hamilton before achieving a maiden half-century and career-best 89 from 59 balls on Tuesday. Rizwan beat his previous best of 33 not out.
With Rizwan's leadership, Pakistan surpassed New Zealand's moderate total of 173-7 with two balls to spare.
Rizwan batted his team within sight of victory when he was out in the final over at 171-6. Pakistan still needed three runs to win with four balls left. Iftikhar Ahmed settled the issue when he hoisted the fourth ball of the last over out of the ground for six, lifting Pakistan to 177-6.
New Zealand had already secured the series but Pakistan's win at McLean Park sends it into the test series in a much more positive frame of mind.
Pakistan won the toss in all three matches, batting first in the first two. A change of tactics on Tuesday to bowl first on a tricky pitch proved successful.
Rizwan put on 40 for the first wicket with Haider Ali (11), then 72 in a match-winning partnership with Mohammad Hafeez. Coming off his unbeaten 99 in the second T20, Hafeez made 41 from 29 balls with two fours and three sixes.
When he was out, Hafeez was just 12 runs short of equaling Shoaib Malik's record of 2,335 runs for Pakistan in T20s.
Pakistan had nervous moments near the end of the innings, especially when Tim Southee dismissed Faheem Ashraf and Shadab Khan with consecutive deliveries with the total 163. Iftikhar survived the hat trick ball and struck the winning runs an over later.
"We lost the series but the last match is very important for the next series," Rizwan said.
"We wanted to create energy in this match so we take momentum into the test match.
"It's a big honor for me to be named captain of Pakistan. It's a dream for me and I can't explain my happiness."
New Zealand's innings progressed in fits and starts. While partnerships were created, few endured. The pitch was two-paced and the slower ball or cross-seamer was especially effective against batsmen trying to settle in.
Martin Guptill and Tim Seifert looked strong in a 40-run partnership for the first wicket but both were out after making starts.
Guptill, again, was unable to build on a solid beginning, making 19 from 16 balls before being caught by Shadab at mid-off from the bowling of Haris Rauf in the fifth over.
Captain Kane Williamson, who made an unbeaten half-century in the second T20 on Sunday returning to the New Zealand team after the birth of his first child lasted only four balls before he was bowled by Faheem for 1.
Williamson tried to cut a ball which was too close to him and chopped the ball onto his stumps.
Following 57 and an unbeaten 84, Seifert was on 35 and confident, having hit two fours and three sixes, when he pushed forward too hard at Ashraf and was bowled by a ball which ducked back through the gate.
Devon Conway made 63 to steer the remainder of the innings. New Zealand was 58-3 in the eighth over when Seifert was out and Conway added 51 with Glenn Phillips (31) for the fourth wicket to give the innings a stronger foundation.