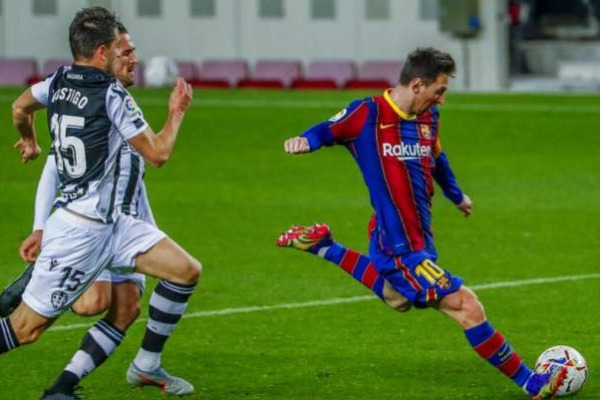 Facing another setback in an already difficult season, Lionel Messi found his finishing touch to save Barcelona from falling further behind in the Spanish league.

Messi's late goal secured a hard-fought 1-0 home victory over Levante on Sunday to end a two-game losing skid for Barcelona.
Messi fired a left-footed shot off the far post and into the net to get Barcelona's breakthrough in the 76th minute after Levante had withstood the hosts with tenacious defending.
"Teams focus on defending Messi, marking him with several players, but today he proved decisive," Barcelona coach Ronald Koeman said.
The victory for Barcelona came after last round's upset loss to C diz and a 3-0 home defeat to Juventus in the Champions League.
Barcelona still has a long way to go to get back in the title race, but it was able to claw back some ground after front-runners Real Sociedad and Atl tico Madrid both dropped points this weekend. Barcelona is in eighth place at nine points behind the leaders. Barcelona and Atl tico have played two fewer games than Sociedad.
Koeman hopes the win will solidify a team that he is struggling to rebuild on the fly this season, ahead of its crucial game on Wednesday when Sociedad comes to Camp Nou.
"Our situation in the league made it necessary to win to reduce the difference," Koeman said.
"Today it was very, very important to win this game. Hopefully it will give us a boost of confidence for Wednesday's game."
Levante goalkeeper Aitor Fern ndez kept Levante in the match with multiple stops to deny Messi, Martin Braithwaite, Antoine Griezmann and Jordi Alba.
Messi finally beat Fern ndez with his 10th shot of the match. He was set up by Frenkie de Jong after the Netherlands midfielder and Braithwaite stole possession from Mickael Malsa inside Levante's half.
Fern ndez got his hands to Messi's powerful strike, but not enough to keep it out.
"It was too bad I couldn't get more of a touch on his strike, said Fern ndez, whose team stayed in the relegation zone. We made one mistake and that led to their goal."
SOCIEDAD BACK ON TOP
Sociedad returned to the top of the standings after drawing 1-1 at home with Eibar.
The San Sebastian-based club pulled level with Atl tico on points and moved into first place on total goals scored with the two teams having the same goal difference.
Atl tico had its first loss of the season on Saturday when it fell 2-0 at city rival Real Madrid.
Ander Barrenetxea put Sociedad ahead in the 20th with a powerful strike from the edge of the area. The 18-year-old forward pounced on a clearance and lashed the ball off the crossbar and into the net.
Eibar improved in the second half led by the playmaking of Bryan Gil. The midfielder on loan from Sevilla cued the 65th-minute equalizer after dribbling past two defenders on the left and crossing for Takashi Inui, who squared the ball for fellow halftime substitute Sergi Enrich to score.
Despite being top, Sociedad coach Imanol Alguacil wants his team to keep its outsider status in the title race.
"I hope that they keep quiet about us and that in a few months we are still at the top," Alguacil said.
VILLARREAL STALLS
Villarreal remained in fourth place, one point behind third-place Madrid, after it was held 1-1 at Real Betis.
Spain defender Pau Torres headed Villarreal in front five minutes after kickoff, but the visitors lost several players to injury and were unable to build on a strong start. Betis' Aitor Ruibal equalized in the 51st.
Villarreal's Pervis Estupi n, Vicente Iborra and Francis Coquelin all left the game injured.
It was a fourth consecutive draw for Unai Emery's side.
GRANADA WINS
Colombian striker Luis Su rez scored for a third straight league match to help Granada beat Elche 1-0.
Granada ended its five-round winless streak.