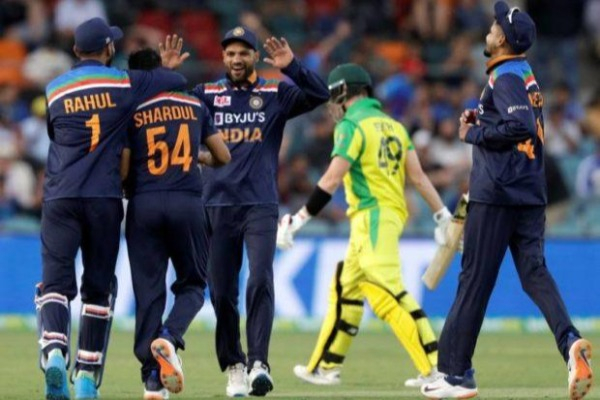 The series pocketed and their confidence restored, India would eye nothing less than a clean sweep when they take on an Australian side significantly weakened by injury blows, in the third and final T20 International here on Tuesday.

Skipper Virat Kohli and his main protagonist of the white-ball leg, Hardik Pandya, will feel a sense of deja vu given that the script has panned out exactly like 2016 when the team got walloped in the ODIs but came back strongly to rout the Aussies 3-0 in the T20 International series.
After a couple of crushing defeats in the first two ODIs, the Indians have turned a corner starting with the final ODI in Canberra.
Even the absence of a white-ball pro like Ravindra Jadeja didn't have an impact during their convincing six-wicket win in the series-clinching second T20 on Sunday.
What will boost the Indian team's morale manifold is the fact that it had the confidence to rest both Mohammed Shami and Jasprit Bumrah, relying on a troika of pacers, who between them haven't played even 40 games collectively.
India's new white-ball sensation Thangarasu Natarajan has had a superb initiation in international cricket with Australian batsmen still finding it difficult to read him.
As Pandya so rightly put it, Natarajan's spell and the 10 runs that Australia failed to score became the difference between winning and losing on Sunday.
The difference between India and Australia during the last game was the batting of the two teams during the middle overs.
Australia lost a bit of momentum after stand-in skipper Matthew Wade was dismissed while his opposite number Kohli played some outrageous shots after the Powerplay to up the ante.
Shreyas Iyer's induction in place of an injured Manish Pandey also worked well for the visitors.
The only glitch in an otherwise solid show was Yuzvendra Chahal's rare off-day. Not having a sixth bowling option meant that Kohli was forced to have his premier leg-spinner complete his quota.
For Australia, the absence of regular skipper Aaron Finch, David Warner, Mitchell Starc, Pat Cummins and Josh Hazlewood did have an impact although three of the five did play in the first T20 International that India comfortably won by 11 runs.
D'Arcy Short hasn't looked the part as an opener in the two games and one would expect Marcus Stoinis and Glenn Maxwell to shoulder more responsibility as senior players.
But Australia's thin-on-experience bowlers will have to play out of their skins to stop the Indian juggernaut which has started rolling.
A 3-0 win would be the perfect booster shot for it before the all-important Test series.
In case of Australia, while a thrashing would impact them a lot but they would try and look at it from a different perspective -- most of their Test specialists will not have the scars of a clean sweep when they take on India under the lights at the Adelaide Oval, starting December 17.Squads:
India: Virat Kohli (Captain), Shikhar Dhawan, Mayank Agarwal, KL Rahul (vice-captain and wicket-keeper), Shreyas Iyer, Manish Pandey, Hardik Pandya, Sanju Samson (wicket-keeper), Washington Sundar, Yuzvendra Chahal, Jasprit Bumrah, Mohammed Shami, Navdeep Saini, Deepak Chahar, T Natarajan, Shardul Thakur.
Australia: Matthew Wade (Captain), Sean Abbott, Mitchell Swepson, Alex Carey, Nathan Lyon, Josh Hazlewood, Moises Henriques, Marnus Labuschagne, Glenn Maxwell, Daniel Sams, Steven Smith, Marcus Stoinis, D'Arcy Short, Adam Zampa, Andrew Tye.
Match starts 1.40 PM IST.