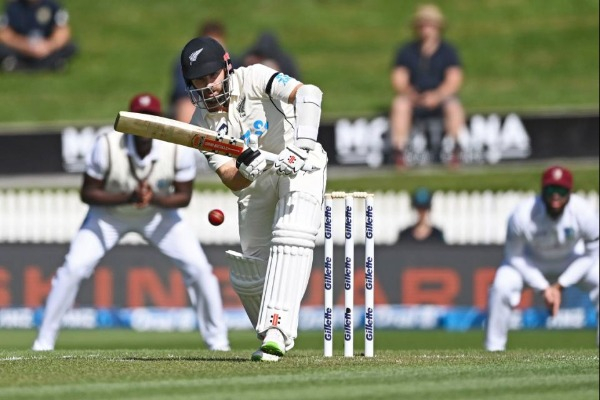 The West Indies might have been having a good day on the second day of the first cricket test against New Zealand on Friday if it hadn't been for Kane Williamson, who stood almost single-handed against them to post his third double century.

The tourists picked up the wickets of Ross Taylor (38), Henry Nicholls (7), Tom Blundell (14) and Daryl Mitchell (9) in the first two sessions with a bowling performance much improved on the first day when they won the toss and fielded.
But Williamson was an impregnable barrier to their effort to bring more balance to the test Friday, methodically building the second-highest score of his test career.
At tea the New Zealand captain was 236 not out, Kyle Jamieson was 35 and New Zealand was 477-6.
Williamson had a dramatic let-off in the hour before tea. Having posted his double century from 369 balls in 554 minutes in a feat of concentration, technique and application, he went on the offensive and hit two fours and a six from consecutive balls from Kemar Roach.
He then edged the next ball from Roach to stand-in wicketkeeper Sharmarh Brooks.
Williamson began to walk from the ground but the television umpire intervened and called no-ball, indicating Roach had over-stepped and allowing Williamson a dramatic reprieve.
Roach was also immensely unlucky. He had been by far the best of the West Indies bowlers in the match, the one who troubled Williamson most often, but he was denied New Zealand's most-prized wicket. At tea he had 3-114.
Williamson resumed Friday at 97 after helping New Zealand to 243-2 at stumps on a first day shortened bay rain. He started by clipping a single then reached his first milestone of the day, his 22nd century, with a signature shot, rising up on his toes to punch a short ball from Roach to the boundary wide of point.
He also brought up his double century with a boundary from Roach, a fluent cover drive which was another of the characteristic shots that peppered his innings. His 200 included 30 fours or 120 runs from boundaries.
Williamson had partnerships of 154 with Tom Latham for the second wicket and 83 with Taylor for the third.
His partnership with Jamieson was worth 68 at tea. But his individual effort was the backbone of a first innings which has placed New Zealand in a commanding position in the test.
Every element of his continuing innings Friday bespoke Williamson's extraordinary talent and nature. Most batsmen would have fretted to be just short of a century at stumps in a test match, likely would have slept uneasily that night.
Williamson showed no signs of concern, actually exuded calm as stumps approached on the first day and found him still short of a century.
He resumed on the second day as if his innings had not been interrupted by a long night of anticipation. Williamson was still poised at the crease, relaxed and fully in command. Partners came and went, most relatively quickly, but Williamson remained impeturbable and immoveable.
The West Indies' position was made more difficult because batsman Darren Bravo and wicketkeeper Shane Dowrich are both injured and may not be able to bat.