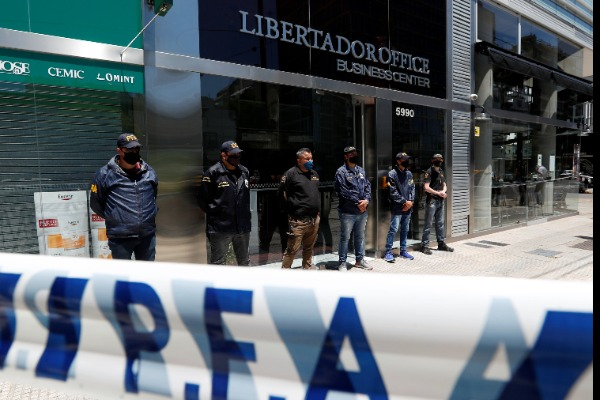 The investigation into Diego Maradona's death continued with police raids on the office and home of the psychiatrist who cared for the soccer star and is being investigated for possible medical negligence.

By order of the attorney general's office of San Isidro, officers entered an apartment used by Agustina Cosachov for consultations in Buenos Aires on Tuesday, while another group of police searched her private home.
"The prosecutor let me know that her medical behaviours are being investigated," psychiatrist Vadim Mischanchuk told reporters.
"These are routine measures, as is the case in all the causes of a patient's death, to reconstruct his medical history."
Cosachov was part of a medical team that treated Maradona after he underwent surgery for bleeding on the brain in early November. The 60-year-old former player died last Wednesday of heart attack at a house in a gated community of Buenos Aires where he was living during his rehabilitation.
Investigators determined no violence was involved in the case, but the prosecutor initiated an investigation into possible medical negligence that have led to Maradona's death, which caused an outpouring of emotion across Argentina and among soccer fans around the globe.
Maradona suffered a series of medical problems, some due to excesses of drugs and alcohol. He was reportedly near death in 2000 and 2004.
In a statement released through her lawyer, Cosachove said, "There is peace of mind on my part about the medical decisions I made."
Police are also investigating neurosurgeon Leopoldo Luque, who cared for Maradona in recent months and participated with other specialists in the brain operation in November. Officers also raided his home and office Sunday and took medical records of Maradona as well as computers, hard drives and cellphones.
In a statement, Luque described Maradona as a difficult patient to treat but said he tried to help him at all times.
"Diego hated doctors. He hated psychologists, he hated everybody involved in health. Diego needed help, there was no way of getting through to him. He had autonomy, he decided on his health," Luque said.
"Responsible for what? We all did the best we could. All of us.