We approach each game with never-say-die attitude: Warner 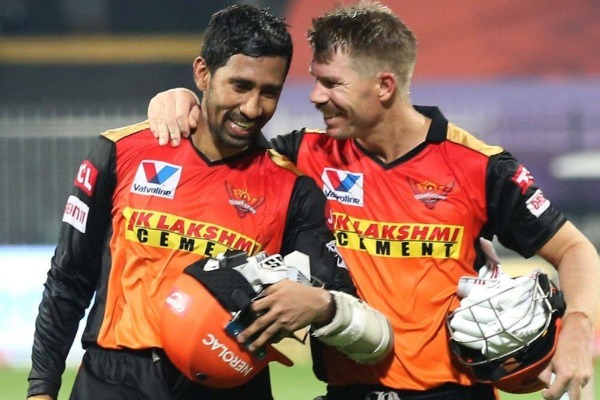 Sunrisers Hyderabad delivered under pressure in a must-win game to crush table toppers Mumbai Indians by 10 wickets and qualify for the play-offs.
Warner (85 not out off 57) and Wriddhiman Saha (58 not out off 45) lit up the last league game of the tournament with an unbeaten 151-run opening stand to chase down a 150-run target in 17.1 overs.
"It feels good now after that dreadful loss against KXIP. They (MI) rested a few players but to hold them to 150 on this ground was great. A lot of credit goes to the bowlers, (Shahbaz) Nadeem was superb.
"We were trying to be as clinical with the bat then, and it feels good," he said at the post-match presentation.
It was a third straight win for SRH who had to beat Mumbai to qualify.
"We have a never say die attitude and that is how we approach each game. We had a couple of injuries but they are here in spirit and we are doing it for them. If we can take this performance and momentum into the next game we'll be really happy.
"...We looked at 2016, we were in the same situation where we had to win every game to win the title. A dropped chance by Rashid Khan and his reaction shows how much it means to him. If we can take this performance and momentum into the next game we'll be really happy."
On his performance, he said: "I pride myself on getting my team to a great start. That is my duty, my job. Fortunately the last few games have been great and we have been able to go in a positive manner."
SRH finished third in the points table with 14 points and a much better run-rate than Royal Challengers Bangalore, who finished fourth on the same number of points. Both teams play the eliminator in Abu Dhabi on Friday.
"RCB are a great team, very well led by Virat (Kohli). They have a lot of dangerous players in their side. We beat them in the final in 2016 and I am excited for the challenge in a do-or-die game," added Warner.