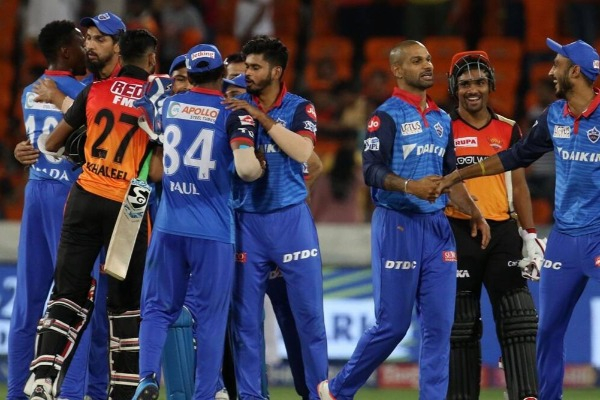 Delhi Capitals would look to complete the unfinished business and seal their place in the playoffs when they take on Sunrisers Hyderabad in a crucial Indian Premier League match here on Tuesday.

Two back-to-back defeats against Kolkata Knight Riders and Kings XI Punjab must be hurting but DC need to shrug it off and add two points to take their tally to 16, which will elevate them to the top of the table.
On the other hand, Sunrisers' hopes to reach the playoffs are hanging by a thread. David Warner and his men occupy the penultimate spot with eight points from 11 outings.
To reach the qualifiers they must win their remaining three games and hope all other results go their way.
The Capitals possess an explosive batting department as well as a formidable bowling unit. They have not been dependent on any one person, as different players have raised their hands at different points of time to deliver the goods for the team.
However, apart from Shikhar Dhawan, the Delhi batsmen have been very inconsistent in the last three games.
In the win against CSK, Dhawan, who scored a century, did the heavy lifting with the bat.
The senior opener again notched up a hundred against KXIP but with no substantial contributions from the other batsmen Delhi lost the game.
Against KKR, the Delhi batsmen crumbled under pressure, managing to put up only 139 runs in 20 overs while chasing 194.
Opener Prithvi Shaw, who has been going through a lean patch, was replaced by Ajinkya Rahane but to no avail as the senior Indian player perished without opening his account.
Rishabh Pant and Shimron Hetmyer have also struggled since their return to the playing XI.
The South African pace duo of Kagiso Rabada (23 wickets) and Anrich Nortje (14) has been exceptional. Tushar Deshpande and Ravichandran Ashwin's performance has been erratic in recent matches, while Axar Patel has done well to suffocate the opposition teams.
Sunrisers head into the clash after a demoralising loss. Chasing a modest 127 against KXIP, the complexion of the match changed following the dismissal of openers Warner and Jonny Bairstow in quick succession.
The former champions lost five wickets in the final two overs to suffer a humiliating defeat.
The team heavily relies on its batting unit, mainly on Bairstow, Warner and Manish Pandey. Vijay Shankar did well in the win against Rajasthan Royals but couldn't replicate his performance against KXIP.
The bowling unit strengthened by the inclusion of Jason Holder was outstanding in the previous game and skipper Warner will desperately hope they put up a similar display against Delhi.
The Orange Army will also take confidence from the fact that they defeated Delhi earlier in the tournament.
Teams (from):
Delhi Capitals: Shreyas Iyer (c), Kagiso Rabada, Marcus Stoinis, Sandeep Lamichhane, Ishant Sharma, Ajinkya Rahane, Ravichandran Ashwin, Shikhar Dhawan, Shimron Hetmyer, Alex Carey, Mohit Sharma, Prithvi Shaw, Lalit Yadav, Avesh Khan, Axar Patel, Tushar Deshpande, Rishabh Pant, Harshal Patel, Keemo Paul, Amit Mishra, Anrich Nortje, Daniel Sams.
Sunrisers Hyderabad: David Warner (C), Jonny Bairstow, Kane Williamson, Manish Pandey, Shreevats Goswami, Virat Singh, Priyam Garg, Wriddhiman Saha, Abdul Samad, Vijay Shankar, Mohammad Nabi, Rashid Khan, Jason Holder, Abhishek Sharma, B Sandeep, Sanjay Yadav, Fabian Allen, Prithvi Raj Yarra, Khaleel Ahmed, Sandeep Sharma, Shahbaz Nadeem, Siddharth Kaul, Billy Stanlake, T Natarajan, Basil Thampi.