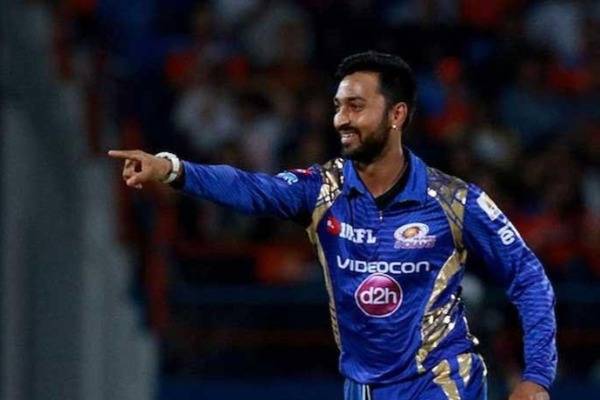 Mumbai Indians' all-rounder Krunal Pandya credited the team's bowling unit for the five-wicket IPL win over Delhi Capitals, saying that taking wickets in the powerplay and not conceding too many runs at the death overs proved crucial.

Defending champions Mumbai Indians dished out a clinical performance as they first restricted Delhi Capitals to 162 for four and then returned to overhaul the target, scoring 166 for 5, in 19.4 overs on Sunday night.
"We bowled really well as a unit, especially in the powerplay, we got the early breakthrough," Krunal, who took two wickets for 26 runs in his tight spell, said at the post-match press conference.
"In the T20 format, whenever you get the early breakthrough, the pressure is more on the opposition, we did not concede too many runs in the death overs, in between, Chahar also really bowled well, it was a good team effort.
"It is a blessing, we have three bowlers who can bowl at 140 consistently, for any team to have three bowlers who can bowl quick and swing the ball is really good."
Talking about his own performance, Krunal said: "I am happy with the way I bowled against Delhi Capitals, my strength has been varying the pace, I was able to execute the plans overall. Obviously, you have to see the strength of the batsman and the situation."
Opener Quinton de Kock and Suryakumar Yadav smashed 53 to help Mumbai Indians script a successful chase.
"When you have 180 you know you have to go hard and when you are chasing 140 odd, then you can take your time. In-between totals are really tricky, we got a good start, the way Surya and Quinny batted, they never allowed the opposition bowlers to settle," Krunal said.
DC skipper Shreyas Iyer admitted they were outplayed in all departments and credited the Mumbai spinners for not allowing them to score freely.
"...they did not give us a single opportunity to take them on. I think they really outplayed us in all three departments, the credit goes to their spinners, they bowled really well and they bowled as per their plans," he said.
Iyer heaped praise on Dhawan for returning to form with a 52-ball 69 which was studded with six boundaries and a six.
"It was important for us to get Shikhar back in form, he is an amazing batsman, he paced his innings really well. He can give us great starts in tough situations. I am happy for him and the team would be hoping for good performances from him," he said.
Delhi Capitals will face Rajasthan Royals on October 14, while Mumbai Indians will take on Kolkata Knight Riders on October 16.

Aus scraps plans for games in Europe amid COVID spike

Loss against RCB was morale-crushing, but destiny still in our hands: McCullum