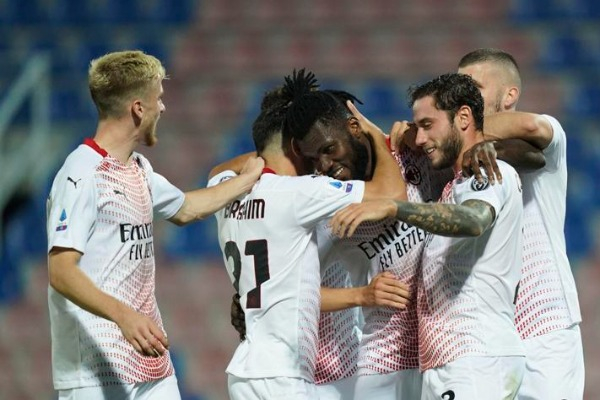 Even on a night when Juventus was outplayed for long stretches, the nine-time defending Serie A champion managed to salvage a point in a 2-2 draw at Roma.

Cristiano Ronaldo scored twice, including a second-half equalizer with a towering header after Juventus had been reduced to 10 men, while Jordan Veretout had a brace for Roma.
We got back into it, even after the red card, Ronaldo said.
By the end of the season this could prove to be an important point."
Veretout put Roma ahead in the 31st with a penalty following a handball from Adrien Rabiot, who was trying to block a shot from Veretout.
Ronaldo then equalized from the spot after Lorenzo Pellegrini used his arm to block the five-time Ballon d'Or winner.
Veretout scored his second in first-half added time as Roma tore past Juventus' veteran but aging center backs Leonardo Bonucci and Giorgio Chiellini. Henrikh Mkhitaryan escaped down the left flank and crossed for Veretout, who used one touch to get away from a defender before shooting past goalkeeper Wojciech Szczesny.
Juventus was reduced to 10 men in the 62nd when Rabiot picked up his second yellow card for sticking his boot into the left thigh of Mkhitaryan.
Moments earlier, Roma forward Edin D eko struck a shot off the post after his marker had already fallen to the ground.
Juve then had a chance to equalize when Ronaldo volleyed directly at goalkeeper Antonio Mirante.
Ronaldo finally found the target again in the 69th when he rose to head in a cross from Danilo -- giving him three goals in Juve's opening two matches.
We're at the start of the season and there's a new coach (Andrea Pirlo) with new ideas, Ronaldo said. But I see the team working well, enthusiastic and I see a bright future for us. It was the first point this season for Roma, which was inflicted with a 3-0 loss in its opener last weekend at Hellas Verona for using an ineligible player. The match had ended 0-0.
Juventus, which beat Sampdoria 3-0 in its opener, trails early Serie A leaders Napoli, Verona and AC Milan by two points.
A limit of 1,000 fans is being allowed for soccer games in Italy amid the coronavirus pandemic.
NAPOLI ROUT
Hirving Lozano scored twice as Napoli routed Genoa 6-0 in a match that had been delayed by a positive coronavirus result.
Kickoff was pushed back by three hours after Genoa goalkeeper Mattia Perin tested positive, prompting a new round of swabs on Saturday and delaying the team's trip to Naples. Genoa midfielder Lasse Sch ne also tested positive.
Napoli led 1-0 at halftime after Dries Mertens had set up Lozano for the opener in the 10th minute.
Piotr Zielinski scored seconds after the restart and Mertens also netted before Lozano doubled his tally.
Goals from Elif Elmas and Matteo Politano capped a great night for Napoli, which visits Juventus next week.
Napoli forward Lorenzo Insigne is now a doubt for that match after pulling up injured with a thigh injury in the first half.
INJURY FEARS
There was also bad news for AC Milan as forward Ante Rebic was forced off with a possible dislocated elbow in the Rossoneri's 2-0 win at newly promoted Crotone.
Milan is already without forward Zlatan Ibrahimovic, who tested positive for COVID-19 last week.
Franck Kessi converted a penalty for Milan on the stroke of halftime and Brahim D az doubled the visitors' lead five minutes after the break with his first goal for the club.
Stretching back to last season, Milan extended its unbeaten streak to 17 matches in all competitions the first time it has reached that number since 1996 under Fabio Capello, when it went 27 games without a loss.
OTHER MATCHES
Andrey Galabinov scored newly promoted Spezia's first-ever Serie A goal but it lost its first match in the Italian top flight 4-1 at home to Sassuolo.
Verona beat Udinese 1-0.