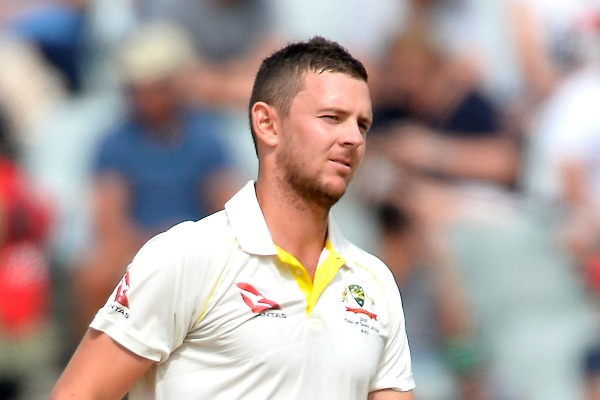 Australian pacer Josh Hazlewood is hoping to get enough game time in red-ball cricket before the first Test against India later this year and has expressed a desire to see the series opener being played in "lucky" Brisbane.

India are scheduled to tour Australia for a four-match Test series later this year.
Considering the situation arising out of the COVID-19 pandemic, he said even a practice game against Australia A squad would work well with him.
"The summer is becoming a bit clearer as the days go by and I'm sure we'll get enough red-ball cricket before that first Test, whether it's Australia versus Australia A or something like that," he was quoted as saying by ESPNcricinfo.
"I'm quite happy with just one long-form game, I feel like that's enough for me to get up and running. That's what I've done last five or six years, one Shield game and straight into the Test matches."
Hazlewood admitted his teammates would ideally like to start the Test series in Brisbane, where Australia have not lost since 1988.
"Things are out of our control a bit at the moment. Obviously, we'd love to start in Brizzy with our great record there," he said.
"We play well there and sort of get on a role, but this year will be a lot different. We love playing in Adelaide whether it's red ball or pink and it's always a great wicket."
The series India won two years ago started in Adelaide, where the visitors won, and Brisbane was not among the venues.
Hazlewood is among many Australian players, including fellow paceman Pat Cummins, who will head from the ongoing tour of England to the IPL, where he has a contract with Chennai Super Kings, before returning home in early or mid-November.
The pacer, who played his first T20I in four years on Tuesday, said he has adjusted to the game's shortest format.
"I feel comfortable in the format, have been working on a few things and they seem to be going well." he said.
"Hopefully I get a few games for Chennai this year and every time I get out there in T20 just keep taking the opportunity.