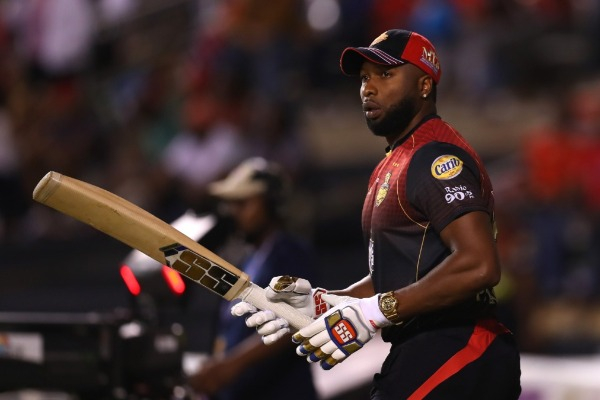 The Knight Riders installed themselves as firm favourites for the title after recording a sixth straight win to stay atop the table.
Sent in to bat, Tridents lost Shai Hope (4) early but Johnson Charles (47) and Kyle Mayers (42) showed a lot of aggression to help the team post 148 for 7.
In reply, the Knight Riders were struggling at 62 for 5 but Pollard smashed nine sixes and two fours in his 72 off 28 balls to take the team home.
Earlier, Charles scored 44 of the Tridents' 59 for 1 in first 10 overs. He was out when he steered a full toss straight to Simmons at point. Mayers then launched a few fours before Jason Holder was the third to leave as Tridents slipped to 95 for 3.
Mayers and Corey Anderson tried to force the pace but Sikandar Raza struck twice in the 17th over, dismissing both the batsmen to leave them at 107 for five.
Ashley Nurse (19) and Rashid Khan (12) then played some lusty shots to take the Tridents to close to the 150-mark.
Chasing the total, Knight Riders lost two quick wickets of Tion Webster (5) and Colin Munro (0) to be reduced to six for two.
Rashid Khan then trapped Bravo leg before in a wicket-maiden. Tim Siefert (4) then edged Raymon Reifer to the keeper as Knight Riders were 48 for four.
When Pollard came to the crease the team needed 87 off 39 balls. He served notice smashing Hayden Walsh into the scoreboard first ball and then hammered Rashid for a six over long-off.
After Lendl Simmons left, the Knight Riders needed 66 in 24 balls.
In the 17th over, Pollard smashed four sixes before hitting Reifer for successive fours in the next over to reduce the equation to 31 off last 12 balls.
With two brutal sixes off Holder, Pollard made it 15 off the final over. He started with a six off Reifer but was run out the next ball while going for a desperate second run.With eight needed in four balls, Khary Pierre and Jayden Seales took them home.
In another match, opener Glenn Phillips batted through 20 overs, scoring an unbeaten 79 off 61 balls to help Jamaica Tallawahs post a competitive 147 for 6.
Their bowlers, led by Carlos Brathwaite (3/11), then completed the job, dismissing the Patriots for 110 in 19.4 overs for a comfortable win.
Earlier, promoted to open, Nkrumah Bonner steered Sheldon Cottrell for four and drove Ish Sodhi for six before being dismissed by Imran Khan as he chipped to Cottrell at long-on.
Jermaine Blackwood and Phillips then took the Tallawahs to 53 for one at halfway stage.
With Phillips dropping anchor, the Tallawahs were 79 for 2 in the 14th over and then 97 for three after 16.
Phillips finally opened up with three straight sixes off Cottrell in the 17th over which produced 21 runs. While wickets fell at the other end, Philips upped the scoring with a flurry of fours and sixes. He hit another six in a 15-run last over as the Tallawahs reached 147 for six.
For Patriots, Kieran Powell opened the innings with Evin Lewis suffering a groin injury. The other opener Chris Lynn was the first to go as Patriots closed the first six overs at 39 for one.
Then in a span of 10 runs, Patriots lost four wickets and were reduced to 52 for five.
Spinners Sandeep Lamichhane and Mujeeb ur Rahman did a fine job with two and one wickets respectively as Patriots never challenged. Lewis came to bat and scored 21 in 16 but it wasn't enough.
Tallawahs will meet Trinbago Knight Riders on Tuesday.