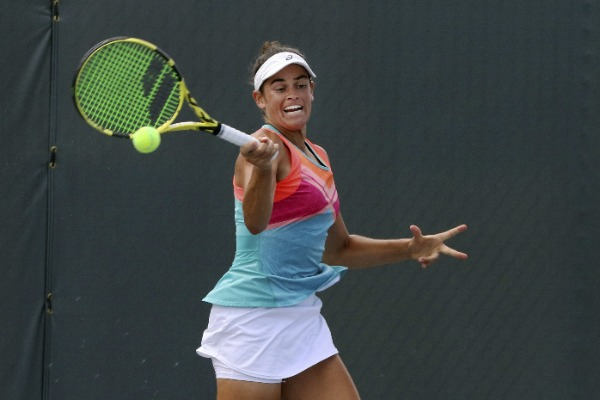 Jennifer Brady reached the first WTA final of her career by using a power-based game to beat 16-year-old Coco Gauff 6-2, 6-4 at the Top Seed Open, the first tennis tournament in the U.S. since the start of the coronavirus pandemic.

Brady, a 25-year-old based in Florida, will face Jil Teichmann, a 23-year-old left-hander from Switzerland, in Sunday's title match.
Neither finalist has dropped a set at the hard-court tuneup for the U.S. Open, which starts Aug. 31 in New York.
Brady has ceded a total of just 17 games through four matches and was broken only once by Gauff. In their match, Brady hit eight aces and won 22 of 26 first-serve points.
"If I'm able to serve well, I'm able to start the point aggressive, start it in my favor, looking for forehands and be in control of the point from the very first shot, Brady said.
Gauff eliminated the No. 2 and No. 8 seeds earlier in the tournament.
"I couldn't ask for a better first week back," Gauff said.
"I mean, the whole goal is just to be in the prime for the U.S. Open, and these are good stepping stones."
Teichmann reached the third final of her career and first on a hard court by eliminating Shelby Rogers 6-3, 6-2 in the day's opening semifinal.
The 116th-ranked Rogers, who is from South Carolina, was coming off a quarterfinal upset of Serena Williams on Friday.
Both of Teichmann's previous WTA titles came on clay in 2019, at Palermo, Italy, and Prague.
"Everyone thinks I'm just a clay-court player. I think I've proven now that it's not only this way," Teichmann said.
"I've been feeling great on hard courts since, let's say, the beginning of the year."
As for her 2-0 record in past WTA finals, Teichmann said: "That doesn't mean anything, (but) for sure, I'm going to the final confident."
She broke Rogers to open the second set Saturday and then faced one key moment while serving up 3-2. Teichmann was down love-40, but erased each of those three break points, held serve and didn't cede another game.