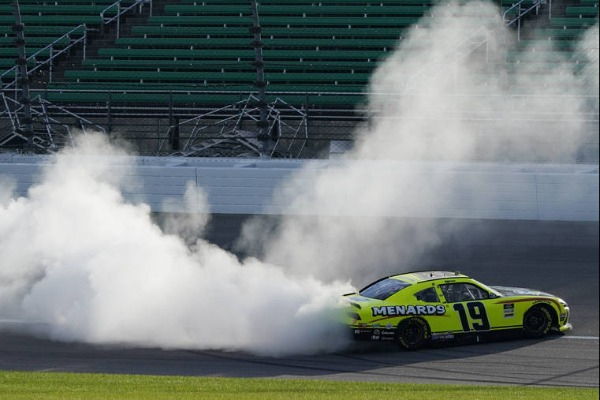 Brandon Jones came roaring around the outside of Austin Cindric on the second attempt at a green-white-checkered finish, then won the race to the finish line to win his second consecutive Xfinity Series race at Kansas Speedway.

It was the second win of the season for the 23-year-old Jones, and it kept Cindric from matching Sam Ard's series record by winning his fourth straight race. Cindric wound up leading 131 of 175 laps in an otherwise dominant performance.
Harrison Burton was third after it appeared he had the win locked up. Burton had a huge lead over Cindric with three laps to go after a long green-flag run, but a caution flag caused everyone to pit. Burton's team had a much slower tire change than its Team Penske rival, and that put him playing catch-up on the first attempt overtime.
That attempt was scrapped when a wreck occurred in Turn 1 deep in the field.
Ryan Sieg finished fourth after staying on the track rather than pitting before the overtime period. Ross Chastain was fifth.
Cindric spent the entire race running near the front, just as he did in sweeping the doubleheader at Kentucky and winning last week at Texas, where Kyle Busch had his car disqualified and that moved him up one spot into first place.
The 21-year-old Cindric started outside Row 2 but quickly moved around Jones for the lead, and he wound up leading 30 of the 40 laps in winning the stage. Cindric also dominated the second stage, though Jones gave him a run in the closer laps, to secure another playoff point to help him navigate the postseason.
The fourth consecutive 1 1/2-mile track for the Xfinity Series was a challenge all day for Noah Gragson, who was third in points behind a pair of wins but couldn't get his car right. Gragson wound up finishing 15th.
Chastain and Michael Annett, who started on the pole, had long top-10 streaks in jeopardy when they were running ninth and 10th with 20 laps to go. Chastain ran his streak to 10 and Annett finished eighth to extend his to six.