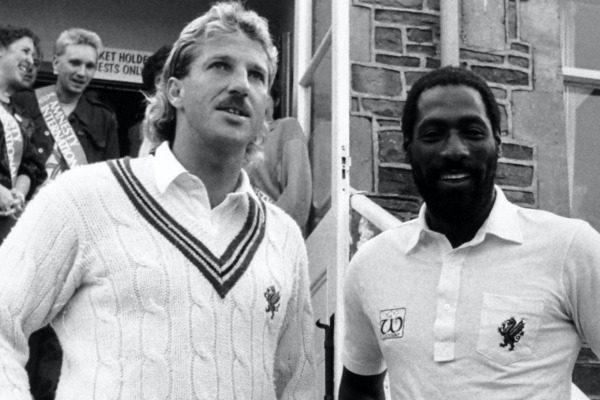 England and West Indies will be vying for the 'Richards-Botham' Trophy when they next clash in Test cricket with the 'Wisden Trophy' being rechristened after the names of the two iconic cricketers from both teams.

The third Test between England and West Indies will be the last time the two teams compete for the Wisden Trophy, the England and Wales Cricket Board (ECB) and Cricket West Indies (CWI) announced in a joint statement.
"England and the West Indies will compete for a new Richards-Botham Trophy when they next meet in a men's Test series to pay tribute to two of their greatest players whose rivalry and friendship embodies the close relationship and mutual respect between the two sides," the ECB said.
A new Richards-Botham Trophy will now be designed ready for when the two teams next meet in a Test series.
"Fierce competitors on the pitch, the pair developed a great friendship off it which still endures, and the new trophy is a fitting way to celebrate the warm relationship between the nation," the release said, referring to the friendship of the two cricketers when they played for Somerset in English county.
Sir Vivian Richards amassed 8540 runs in 121 Test matches at an average of 50 plus with 24 hundreds, while Sir Ian Botham scored 5200 runs apart from taking 383 wickets in 102 games in traditional format.
"This is a huge honour for my good friend Ian and myself," said Richards.
"I am delighted to know that the game that I have shown my love for since a little boy is naming such a prestigious award in recognition of what I managed to achieve as a cricketer," added the legendary batsman.
He spoke about their days as teammates for Somerset.
"When I had the opportunity to go to England and represent Somerset, one of the first persons I met was Ian Botham, who would later become of one my best friends. We are friends for life.
"To have this trophy West Indies vs England named in honour of our work on the cricket field is great. What I think is also remarkable is that it says a lot about our relationship off the field as well," added Richards.
The competition was only on the field and off-field, it was all about brotherhood, he said.
"We were competitors on the field, but we showed we were brothers off the field. I'm proud to have my name on one side of the trophy with him on the other side."
Botham also echoed the same sentiments.
"Viv was the finest batsman I ever played against," said the man nicknamed 'Beefy'.
"He's a great friend but we've always been competitive, not least when we were on the cricket field, and there was no one else's wicket I would treasure more."
Botham admitted that playing against West Indies of late 70's and till end of 80's was very tough.
"Playing the West Indies was always one of the toughest tests in cricket, and it's an honour for this trophy to bear our names. I hope future series will be just as exciting as the one we've all been enjoying this summer."
The Wisden Trophy, first introduced in 1963 to commemorate the hundredth edition of the Wisden Cricketers' Almanack, will now be retired and will be displayed at the MCC Museum at Lord's where it has traditionally been kept.