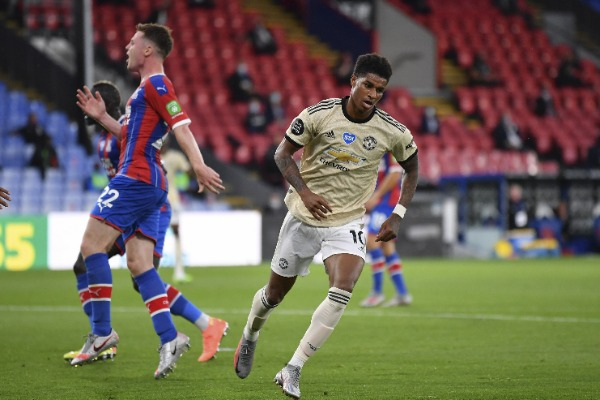 The race to secure the final two Champions League qualification spots from the Premier League is going to the last day of the season.

And two of the three teams still in contention will be going head to head.
Leicester and Manchester United both won on Thursday to ensure their meeting in the final round of matches on July 26 will have plenty riding on it notably tens of millions of dollars in potential Champions League prize money next season.
Leicester's 2-0 home victory over Sheffield United was followed hours later by a 2-0 win for United at Crystal Palace. It left the two teams tied on points with two games remaining, with fourth-place Leicester only ahead by virtue of a superior goal difference.
Before their final-day showdown at King Power Stadium, Leicester plays away to Tottenham on Sunday and United hosts West Ham on Wednesday.
If Leicester and United both win those games, they realistically could find themselves in third and fourth place, respectively, because Chelsea currently one point ahead of them in third place is away to champion Liverpool in its next-to-last game Wednesday.
United rode its luck against Palace, which had a strong penalty appeal turned down Wilfried Zaha appeared to be tripped by Victor Lindelof moments before going behind to Marcus Rashford's well-taken goal in the first-half stoppage time.
Palace then had an equalizer by Jordan Ayew ruled out by VAR for the narrowest of offside calls in the 55th. United sealed victory through Anthony Martial's 17th league goal of the season, which matches Rashford's goal tally.
Leicester was a more comfortable winner, with goals by Ayoze Perez and substitute Demarai Gray seeing off Sheffield United.
Jamie Vardy struck the post for Leicester but stayed on 23 goals for the season, meaning he leads the race for the Golden Boot scoring trophy by three goals heading into the final two rounds.
Leicester will have to do without two key players playmaker James Maddison and left back Ben Chilwell for its last two games, with manager Brendan Rodgers confirming they will not recover from injury in time.
VILLA BLOW
Aston Villa's hopes of staying up received a big blow when the team conceded a late goal to draw 1-1 at Everton.
Theo Walcott scored in the 87th minute for Everton to keep Villa in next-to-last place, tied on points with 18th-place Bournemouth. They are both three points behind West Ham and Watford, who meet Friday in their game in hand.
Ezri Konsa put Villa ahead in the 72nd minute and the visitors should have doubled the lead minutes later, only for Anwar El Ghazi to miss what would have been a tap-in at the back post after being set up by Jack Grealish.
BRIGHTON NEARLY SAFE
Brighton is almost sure of another season in the Premier League after earning a 1-1 draw at Southampton.
Danny Ings scored his 20th goal in the league to earn Southampton a point but Brighton, which went ahead though Neal Maupay, was celebrating at the final whistle.
Graham Potter's team is six points ahead of both Villa and Bournemouth.
Ings joined Arsenal's Pierre-Emerick Aubameyang in being three goals behind Vardy overall.