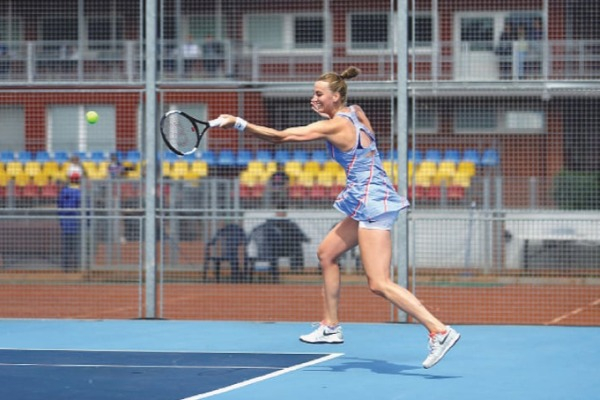 Two-time Wimbledon winner Petra Kvitova has said she would prefer Grand Slams did not take place as opposed to playing them behind closed doors due to the coronavirus pandemic.

Speaking on the eve of her court return in an all-Czech tournament the 30-year-old echoed the thoughts of Roger Federer, who said last week he would be against the idea of an empty Roland Garros or Flushing Meadows.
"I have my age and of course I would like to play another Grand Slam, but if it's like this, I'd rather cancel them," Kvitova said.
"Playing a Grand Slam is the greatest thing there is and playing without fans who are our engine doesn't look nice to me and the Grand Slam doesn't deserve it," she added.
This year's French Open has been moved to September, Wimbledon has been cancelled and the WTA tour will not resume until at least July 20 due to the COVID-19 outbreak.
This week's competition in Prague has eight men and eight women in separate draws but there will be no spectators or handshakes.
There will be referees and ball boys at the tournament, but they will not hand towels to those on the court.
"It's not ethical not to shake hands and just give a racquet bump, I think that's the most unpleasant thing I'm in for," Kvitova said.
Sports came to a halt in Kvitova's homeland, where the virus has claimed 300 deaths from 9,000 confirmed cases, in mid-March.
"We are here to reintroduce tennis not only to the Czech Republic, but also to the world," Kvitova said.
"The hardest thing will be to find the rhythm, we haven't played a match for a very long time," said Kvitova, who faces doubles specialist Barbora Krejcikova in her opening contest on Tuesday.
"I hope nobody expects us to play fantastic tennis, because it may happen or it may not," added the world number 12, wearing a face mask which, she said, had a good thing about it.
"I don't have to wear a make-up."
- 'Not the same thing' -
========================
World number three Karolina Pliskova has pulled out of the women's hardcourt draw as she recovers from a back injury, while 18th-ranked Marketa Vondrousova is getting ready for the final exams at her secondary school.
The men's part will be played on clay.
"It won't be the same thing as a regular tournament," said Jiri Vesely, the 65th-ranked top seed, who won this year's ATP tournament in Pune, India.
"There are no points to play for, no plot, there will be no fans. But of course we are looking forward to the games and we'll try to play our best tennis," added Vesely, who spent the enforced break with his 15-month-old daughter.
"You don't have much time for that during your regular season. It was simply great. And my shape? You'll see," he said.