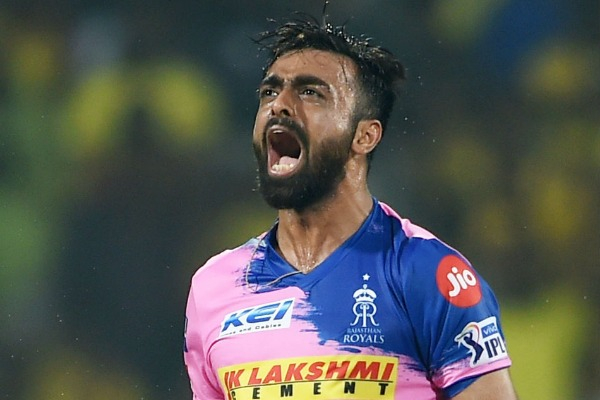 There is a raging debate on whether the use of sweat and saliva should be banned once cricket resumes after the COVID-19 pandemic but seamer Jaydev Unadkat feels that these components won't make much of a difference with white ball.

Unadkat, who has played 7 ODIs and 10 T20 Internationals for India, is a sought-after name in the IPL and plies his trade for Rajasthan Royals.
"I think white ball won't be a problem as a whole. Even in ODIs, you will be using two new balls 25 overs each. Reverse swing has never been a big factor in white-ball cricket. Even the new ball doesn't require any sweat or saliva as far as white ball is concerned," Unadkat told PTI during an interaction.
The Ranji Trophy-winning Saurashtra captain said the reason behind that is that the quote of white lacquer requires little or no sweat or saliva for swing.
"White lacquer remains shiny even if you just rub it on your trousers while for red ball, the red lacquer and the red leather demands that we shine it more with saliva and sweat," the left-arm seamer said.
That's the reason, he feels, that in limited over contests, it will be a lesser risk for bowlers and can be started before one gets to the Test and first-class games.
"If we are starting with white-ball contests, we will surely have an advantage as saliva and sweat are as big a factor as it could be in red-ball cricket."
Even for red-ball cricket, Unadkat feels that precautions will be necessary only if cricket starts before the pandemic have subsided completely.
"If we start closed doors, then probably certain precautions will be mandatory."
Unadkat says that a prolonged break also means that he will be on even keel with some of the other bowlers who would be vying for their places in the Indian team for the World T20.
In fact, had the IPL started on March 29, Unadkat would have barely got three weeks rest after a gruelling domestic season where he carried the burden of Saurashtra bowling.
"To be honest, the big break evens out a lot of things as far as team selection is concerned. A lot will depend on can carry the form through the break and who can can come out sooner.
"You can't really judge now as you dont know how big the break will be. Even if I don't get match time sooner, if we get practice time sooner, it won't take much time to get back the rhythm."
While remaining fit has been a requirement, Unadkat has taken time out to pursue another vocation, which is learning guitar.
It was his fiancee Rinny who encouraged him to take up online guitar classes along with her.
"I had done a a few classes in the past but then lost touch a couple of years back. Luckily my fiancee is also a guitar fan and has taken lessons in the past and both of of us decided to enrol for online classes.
"Two notations that I am currently trying to pick up are Ben King's Stand By Me and John Legend's All of Me are some tunes that I am picking up. Still a little difficult," Unadkat said.
While the fingers strum the strings of guitar, they also want to feel the seam of five and half ounce of hard cherry.
"Now, after more than one month, I am missing being out there on the field and at the same time I know that we have not experienced anything like this before. I think we have to support each other as we go through this.