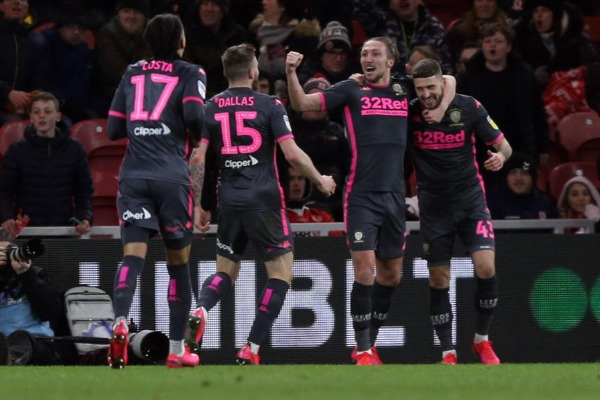 Mateusz Klich fired Leeds back to within four points of Championship leaders West Brom with a hard-fought 1-0 victory at relegation-threatened Middlesbrough.

The Polish international midfielder's goal on the stroke of half-time clinched a third consecutive 1-0 win to move Marcelo Bielsa's men five points clear of the chasing pack in the automatic promotion places.
Leeds had already seen Boro old boy Patrick Bamford and Stuart Dallas go close when they finally took the lead in first-half stoppage time when Pablo Hernandez, who had hit the post seconds earlier, fed Klich to score off the inside of the upright.
George Saville was denied an equaliser by Kiko Casilla's fine save five minutes after the restart and Marcus Tavernier saw his 64th-minute effort come back off the crossbar as the home side fought, ultimately in vain, for a way back into the game.
As a result, Boro head coach Jonathan Woodgate, who started his playing career at Leeds, saw his side slip to within goal difference of the drop zone after a run of 11 games without a win.
Aleksandar Mitrovic left it late to ensure Fulham maintained their promotion challenge with a 1-0 win over Swansea to move up to third.
The game had reached the fourth minute of stoppage time when the Serbia international headed home Aboubakar Kamara's cross, having missed an 89th-minute penalty.
There were significant wins at the foot of the table too, with both Barnsley and Wigan boosting their survival hopes.
Cauley Woodrow scored the only goal as Barnsley beat Hull 1-0 at the KCOM Stadium to climb off the foot of the table and drag themselves to within three points of safety.
Wigan's 3-0 win at Reading hauled the Latics level on points with Middlesbrough.
There was late drama too at Hillsborough, where Sheffield Wednesday striker Steven Fletcher's injury-time header was enough to beat Charlton 1-0, the Owls' first Championship victory in eight outings.
However, Blackburn's hopes of closing the gap on the playoff places was dealt a blow when they could only draw 0-0 with struggling Stoke at Ewood Park, and there were no goals either at Millwall as Birmingham took a point back to St Andrew's.