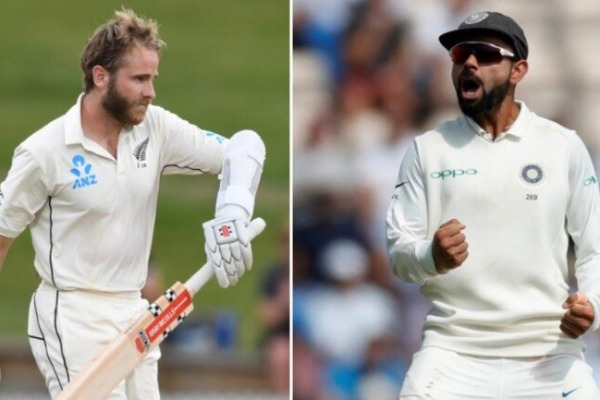 India's battle-hardened cricketers are ready for their toughest challenge of the World Test Championship till date as they face formidable hosts New Zealand on a spicy Basin Reserve track in the series-opener beginning here on Friday.

Virat Kohli's top-ranked team, with 360 points in its kitty, is certainly the favourite on paper but the Black Caps under Kane Williamson are experts at wearing down opposition with their patience on pitches which turn flat as the game progresses.
The last time New Zealand lost a series at home was back in March 2017 and since then have won five (10 Tests) in familiar conditions.
For New Zealand, it is time to pick up pieces after their 0-3 drubbing in Australia while the current Indian team would love to reassert that they are the best when it comes to winning in adverse conditions like they did in Australia last year.
The open Basin Reserve ground has always been challenging for both batsmen and bowlers due to cross winds.
And the new opening pair of Prithvi Shaw and Mayank Agarwal will have its task cut out against a top class seam attack comprising Trent Boult, Tim Southee, and Kyle Jamieson, who in all likelihood will make his debut.
However, the absence of left arm speedster Neil Wagner, who could have created awkward angles with his short balls, will provide some respite for the Indian middle-order. Wagner is on a break to welcome his first child.
New Zealand named their 12 on the day and it will be a choice between seamer all-rounder Daryl Mitchell or slow left-arm orthodox Ajaz Patel.
In an open ground with overcast conditions expected, captain Kohli will not mind winning the toss and unleash Jasprit Bumrah, Ishant Sharma and Mohammed Shami on the home team.
Even Kohli admitted that his men would need to have tons of patience once the track eases out as Williamson's team is known to the play waiting game.
"It doesn't matter how much patience opposition has, we have to show more patience. We can't really prepare in a manner where New Zealand show more patience and put pressure on us," skipper Kohli made his intentions clear during a media interaction.
While New Zealand are expected to go with four frontline pacers and may be a fifth seamer in all-rounder Colin de Grandhomme, the Indian team management might be tempted to try out Ravichandran Ashwin, who purely as a spinner, has more variety compared to left-arm orthodox of Ravindra Jadeja.
The wind factor in Wellington is an issue that captains need to deal with and Kohli is no different as he will have to judiciously choose ends for his bowlers.
"If breeze is blowing across the ground, who is more effective with inswinger or outswingers, these things you think as a captain," said Kohli.
The return of Trent Boult for New Zealand and Ishant for India, from their respective injuries will certainly bolster both the sides.
For India, Cheteshwar Pujara, Kohli and Ajinkya Rahane will have to be the foil around Shaw, Agarwal and Vihari with their techniques being tested.
"As a batsman, you need to think that ball might not travel in the air a lot more when you are hitting against the wind. So you need to be prepared to run a lot more which we experienced last time and if you have a light bat, you are in trouble.
"You need to be firm with your stance and where your bat is as it can really swing around," added Kohli, who is India's best batsman by a mile.
Teams:
India (First 12): Virat Kohli (captain), Mayank Agarwal, Prithvi Shaw, Cheteshwar Pujara, Ajnkya Rahane, Hanuma Vihari, Wriddhiman Saha (wk), Ishant Sharma, Mohammed Shami, Jasprit Bumrah, Ravichandran Ashwin, Ravindra Jadeja.
New Zealand (12): Kane Williamson (c), Tom Blundell, Trent Boult, Colin de Grandhomme, Kyle Jamieson, Tom Latham, Daryl Mitchell, Henry Nicholls, Ajaz Patel, Tim Southee, Ross Taylor, BJ Watling.
Match Starts: 4 am IST.