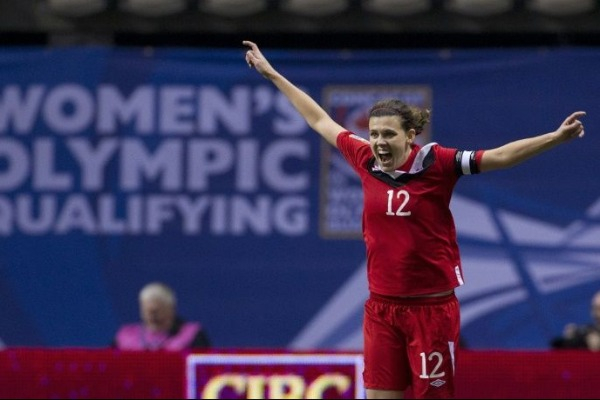 Sinclair scored her 185th career goal on Wednesday to surpass American Abby Wambach's previous record for men or women.
"Christine has been amongst the upper echelon of Canadian athletes," said Sinclair's former women's national teammate Carmelina Moscato.
"What she has done to sports for Canadians is given us memories that we'll never ever forget.
"The Olympics stand out, but just her consistency over the years -- a top goal scorer, always comes through for the team."
Sinclair scored two goals on six shots as Canada outshot the tiny island nation with a population of just 50,000 people 31-2.
The now retired Wambach finished her stellar career with 184 goals, a mark she reached in 2015.
Since bursting onto the international scene as a 16-year-old for Canada, Sinclair has been one of the most consistent goal scorers in women's soccer.
She scored 11 goals in the Olympics and is one of just two players to score in five different World Cups.
Sinclair still holds the collegiate record in the NCAA for the most goals in a single season with 39 in 2005.
She has won two Olympic bronze medals, a Pan American gold medal and four club championships.
She was awarded an Officer of the Order of Canada, and in 2012, she won the Lou Marsh Trophy as Canada's athlete of the year.
Sinclair is Canada's second most well-known female athlete behind hockey player Hayley Wickenheiser.