Zimbabwe 'have to enjoy' first home Test since 2017 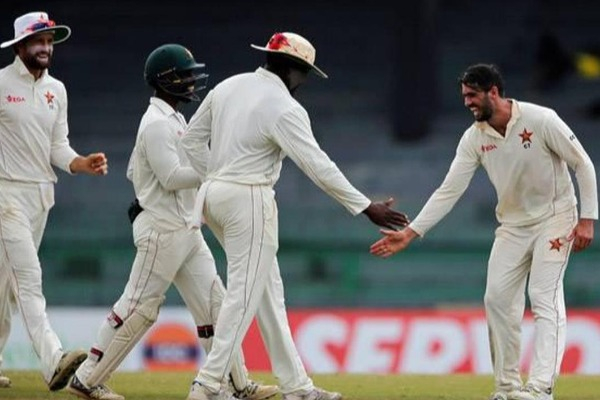 Wicketkeeper Regis Chakabva says that Zimbabwe "have to enjoy" their first home Test since 2017 as the African nation return to five-day action against Sri Lanka after their recent suspension by the International Cricket Council.

The two-Test tour was only announced by the Sri Lankan cricket board earlier this week, with the first match to start in Harare on Sunday.
Zimbabwe were readmitted as an ICC member last October following a three-month suspension over political interference.
The Sri Lanka games will be their first Tests since a 1-1 series draw in Bangladesh in November 2018.
"It's always tough, going for that long between playing Tests, because you always want to play as often and as regularly as possible," Chakabva told cricbuzz.com.
"But unfortunately we haven't had that privilege really, so we just have to accept what is there and as tough as it is, when the next one comes you always have to enjoy it.
"I think for any youngster who's starting off and aspiring they definitely want to be involved (in Tests) at some point in their career."
Mickey Arthur's Sri Lanka arrive in Zimbabwe after a 1-0 defeat in a two-Test series in Pakistan, although that came after the side showed signs of a revival in a shock 2-0 series victory in South Africa and drawn series against New Zealand.
But the tourists have left out fast-scoring batsman Kusal Perera, who scored a match-winning 153 not out against South Africa last February, with Lahiru Thirimanne preferred despite having an average of only 22.64 from 35 Tests.
"Yes, Kusal can make 150s, but we needed someone who can occupy the crease, which is why we chose Thirimanne," said Sri Lanka's chairman of selectors Asantha de Mel.
"Thirimanne can also bat in the top order or as an opener."
Zimbabwe have named all-rounder Sean Williams as captain for the series, with batsmen PJ Moor and Ryan Burl both surprisingly left out.
A third of the hosts' 15-man squad are yet to make their Test debuts, with Victor Nyauchi and Charlton Tshuma hoping to fill the void left by injured fast bowler Tendai Chatara.
Zimbabwe last played a Test at home against the West Indies in October 2017.
Squads
Zimbabwe: Sean Williams (capt), Sikandar Raza, Regis Chakabva (wkt), Craig Ervine, Kyle Jarvis, Kevin Kasuza, Timycen Maruma, Prince Masvaure, Brian Mudzinganyama, Carl Mumba, Ainsley Ndlovu, Victor Nyauchi, Brendan Taylor, Donald Tiripano, Charlton Tshuma.
Sri Lanka: Dimuth Karunaratne (capt), Oshada Fernando, Kusal Mendis, Angelo Mathews, Dinesh Chandimal, Lahiru Thirimanne, Dhananjaya de Silva, Niroshan Dickwella (wkt), Dilruwan Perera, Lasith Embuldeniya, Lahiru Kumara, Vishwa Fernando, Kasun Rajitha, Lakshan Sandakan, Suranga Lakmal.