Kohli has opportunity to improve Barabati record in series decider 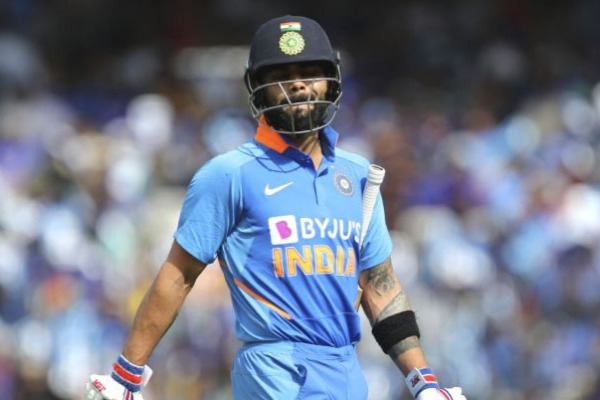 India skipper Virat Kohli, who has scored only 34 runs in four matches across formats at the Barabati Stadium, had an intense training session ahead of the series-deciding third ODI against West Indies here on Sunday.

In an optional net session, Kohli batted for a significant time, going for aerial as well as ground strokes.
Fastest to 10,000 ODI runs, Kohli comes to the series-decider against the West Indies in Cuttack with scores of 4 and 0 in Chennai and Visakhapatnam.
At the Barabati, on the other hand, the Indian star player totals 34 runs -- 3, 22, 1, 8 -- from three ODIs and one T20I, his lowest among all venues in India where he has played at least three matches.
Kohli, who skipped the last match here, a T20I against Sri Lanka in December 2017, was first to pad up as he batted close to half an hour before taking throwdowns.
Indians also seemed pretty concerned about the heavy dew towards the evening as they trained with wet balls under the watchful eyes of fielding coach R Sridhar.
"He literally made it wet while we took catches. We are actually prepared and you know, whatever bad the circumstances would be, we are ready for it," said Shreyas Iyer.
In his assessment of the wicket, he said: "I think it's going to be really fast in the second innings and the dew factor plays a massive role. We have played here before as well against Sri Lanka and in the evening, there was dew in the outfield, it's really too much.