Serie A 'sorry' for monkeys in anti-racism campaign 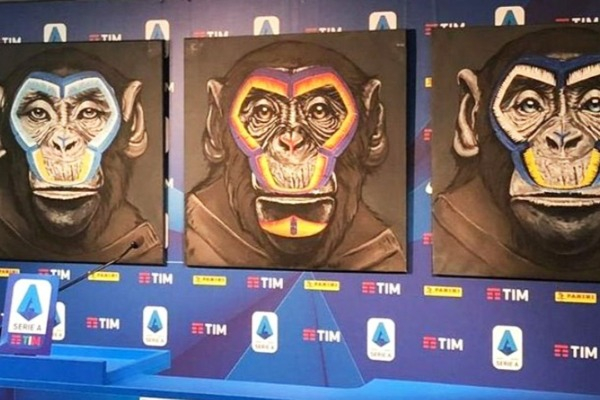 The head of Serie A has apologised for using art featuring monkeys in an anti-racism campaign.

The Italian top flight had initially said the work aimed to defend the values of "integration, multiculturalism and fraternity", but was forced to backpedal after widespread criticism and ridicule.
Serie A's managing director Luigi De Siervo on Tuesday said he "apologises to everyone offended by the work by artist Simone Fugazzotto", which showed three monkeys in close-up, but with slightly different colours over the basic brown.
"Although the artist had explained that the meaning was specifically a message against racism, many have found the work questionable," De Siervo said in a statement.
"What is not in question is Serie A's strong and unwavering condemnation of all forms of discrimination and racism, phenomena we are committed to eradicating from our championship."
De Siervo said the league was working on another anti-racism campaign to be unveiled by the end of February.
Fugazzotto almost always paints monkeys, in a variety of artistic styles, usually wearing human clothes and representing different cultures and historical periods.
"I only paint monkeys as a metaphor for human beings," he said in interviews with the media ahead of the campaign.
"We turn the concept back on the racists, as we are all monkeys originally. So, I painted a Western monkey, an Asian monkey and a black monkey."
The triptych by the Italian artist had been presented Monday at the league's Milan headquarters along with an anti-racism plan which included the signing of a charter by a player representing each of the 20 Serie A clubs.
Italian stadiums are the scene of recurrent racist incidents, including monkey chants aimed at black players.
Earlier this month an audio from a league meeting was leaked in which De Siervo told club bosses that he had asked for microphones near the areas in stadiums where hardcore fans stand to be turned off so racist chants wouldn't be heard.