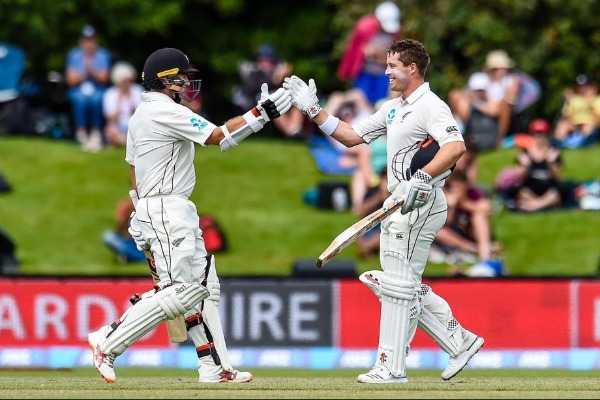 Tom Latham's unbeaten hundred and his century stand with Ross Taylor laid a solid foundation for New Zealand before rain brought an early end to day one of the second Test against England in Hamilton on Friday.

Latham was on 101 when the rain swept in just three deliveries after the resumption of play from the tea break.
It was the left-handed opener's 11th century and lifted him to equal sixth on the New Zealand century-makers list headed by Kane Williamson with 20.
Williamson, however, was off his best this innings when he was dismissed for four in a rocky start for New Zealand after Jeet Raval was removed for five.
But from two for 39, Latham and Taylor put on 116 for the third wicket when Taylor went for 53 to have New Zealand three for 155.
All three wickets were to catches by England captain Joe Root at first slip.
Ben Stokes, at second slip, did not have such safe hands and dropped Latham on 66.
Adding to Stokes' worries, he felt pain in his left knee after bowling two overs and will be assessed overnight to see whether he can bowl again during the innings.
Taylor also received a let-off which proved costly for England when he was hit on the pads by Stuart Broad and given out.
After conferring with Latham, Taylor appeared to believe there was a ball direction issue and sought a review.
TV umpire Bruce Oxenford overturned the decision when slow-motion video replays detected a faint sound after the ball passed the bat but had not reached the pads.
Oxenford believed it could only have come from an inside edge which Taylor did not feel and overturned the dismissal.
A relieved Taylor batted on to bring up his 32nd Test half-century with a four and was dismissed on the next ball.
Root won the toss and put New Zealand in to bat, citing Seddon Park's history of favouring the side bowling first.
But after the cheap wickets of Raval and Williamson, it was the batting of Latham and Taylor that dominated for nearly 34 overs.
Latham has 15 fours in his 101 off 164 deliveries while Taylor faced 100 balls for his half-century which included eight boundaries.
Woakes, brought in to give England five seamers at the expense of spinner Jack Leach, had figures of two for 41 while Stuart Broad had one for 33.